Each Monday, our team will be breaking down commonly held weather myths and uncovering the truth behind them.

Animals including dogs, cats, birds and rats have been known to exhibit unusual behavior before a storm. This could be due to their keen sense of smell and hearing, along with sensitive instincts. Some say that dogs can also sense the change in barometric pressure that comes with storms like hurricanes, tornadoes and thunderstorms. This can cause them to bark, cuddle, or hide in an attempt to seek shelter.

Learn More About Animal Instincts
Can Animals Predict the Weather While the visible spectrum of a rainbow contains the colors in ROYGBIV, this is only part of the colors or light a rainbow actually contains. Rainbows contain upward of 1 million colors, including those within infrared and ultraviolet radiation, radio waves (beyond infrared), x-rays (beyond ultraviolet), and gamma radiation (beyond x-rays). Scientists use an instrument called a spectrometer to study these invisible parts of the rainbow.

The so-called “butterfly effect” has long been used to explain why meteorologists will never be able to accurately predict the weather beyond several days. While it is impossible to measure and quantify every element within our atmosphere — like the single flutter of a butterfly’s wing — it’s false to believe that the same flutter of a butterfly’s wing in Brazil will be the catalyst for a tornado in Texas. In fact, mathematicians decided to put the argument to rest once and for all in 2001 by inputting an equivalent flutter into global weather models. They were not surprised by the result: the weather models did not change. A tsunami is not one wave towering over the shore, but rather a series of waves containing a massive amount of energy. When earthquakes, volcanic eruptions and other disturbances create a large amount of energy, water is displaced and the large waves are formed. In deep water, a tsunami can be undetectable, but as the tsunami nears the coastline and the depth of the water becomes more shallow, the energy compresses and forces the water upward into the giant wave that crashes upon the shore. The best way to stay safe during a tsunami is to get to higher ground.

Tape Up Your Windows?

Despite this myth being given out as advice in the 80s, experts now know that taping your windows does nothing to strengthen the glass. Instead, protect your windows and home by installing metal, wood or canvas coverings before a storm. These will help keep the wind out, which is one of the best ways to keep your home safe. Learn more about going tapeless. 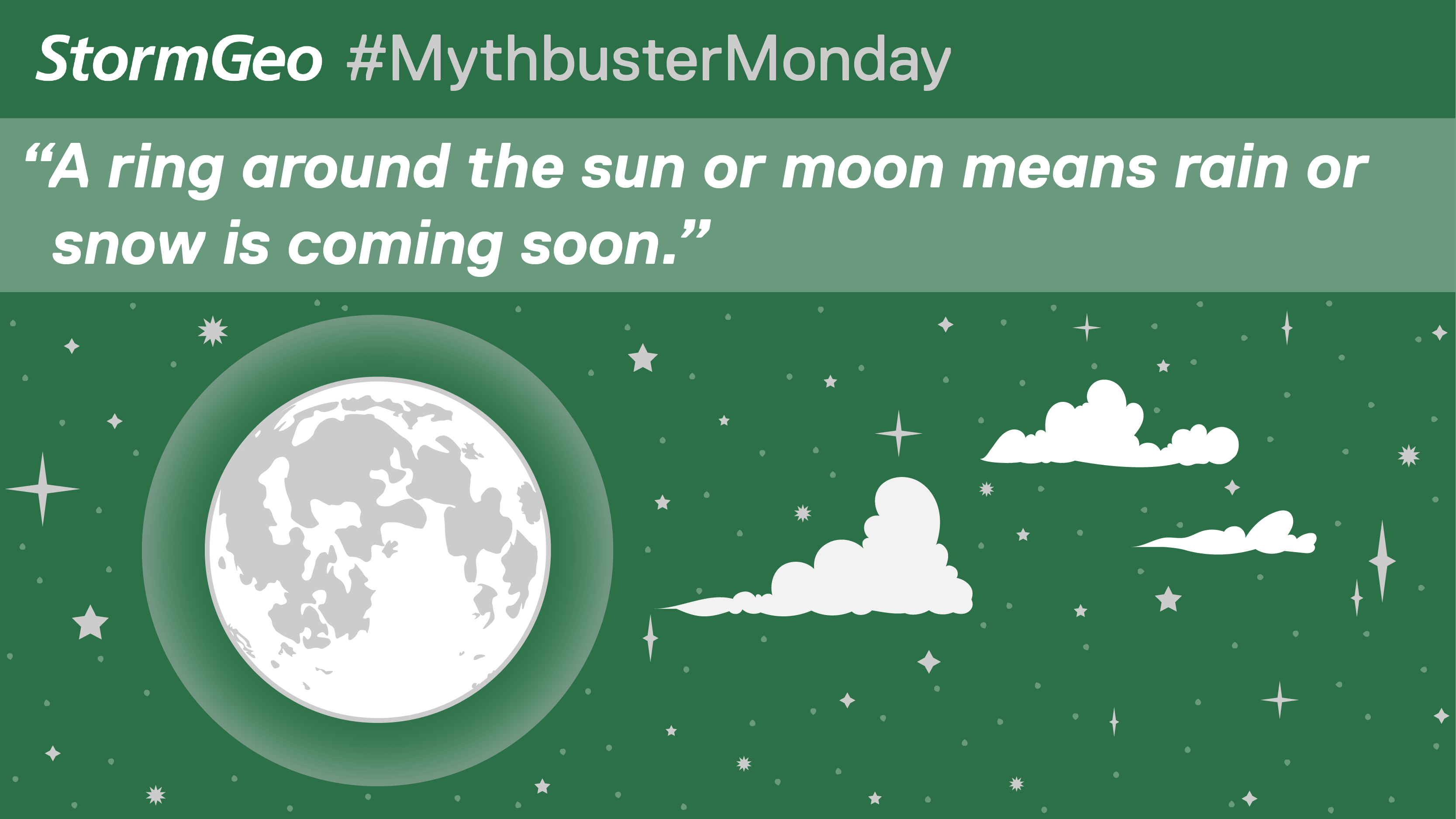 Cirrus clouds contain millions of tiny ice crystals. When light is refracted and reflected through these ice crystals, a ring or halo around the sun or moon can appear. Cirrus clouds precede low-pressure systems, and because these systems often bring precipitation, halos may be an indication that rain is indeed coming.

This old saying has some truth to it! When light passes through high pressure (aka “good weather”), contaminates trapped by the pressure will scatter the red wavelength of light, giving a red appearance to the sky. Because weather systems move from west to east, a red sky at sunset represents good weather coming in from the west. Conversely, a red sky at sunrise indicates high pressure has moved to the east, meaning there is currently low pressure and thus, a higher chance of bad weather. True or false? A little insight into lightning – which can and does strike the same place twice. In fact, New York City’s Empire State Building is struck regularly during the course of the year and has been struck as many 12 times during a single storm.