How a tanker saved $54,000 in time and fuel by avoiding a great circle route - StormGeo A tanker vessel proposed taking a great circle route—the shortest path between two points on a globe—but StormGeo Route Analysts recommended a detour that ended up saving $54,000 in time and fuel, while keeping all people and assets safe.

In November, a tanker vessel proposed a great circle route from the Panama Canal toward Japan. For many shipping routes, sailing along the shortest great circle route can yield the earliest time of arrival. This is often true during summer months, when seas are more tranquil, or when ships are sailing in the same direction as winds and seas.

When vessels depart the Panama Canal bound for the Far East, in summer months often the shortest-time route is the shortest-distance route, usually following a great-circle that arcs across the Pacific Ocean, along the west coast of North America, south of the Aleutian Islands, and toward Japan.

A vessel can expect to encounter lighter weather on that route in summer months, so much so that the negative effects of the vessel sailing into persistent mid-latitude westerlies are negligible when compared to the increased distance it would take to sail south of these lighter weather and sea conditions.

With this in mind, it’s not surprising that the tanker vessel suggested taking the great circle route, but StormGeo Route Analysts recommended the vessel sail south of Hawaii instead. 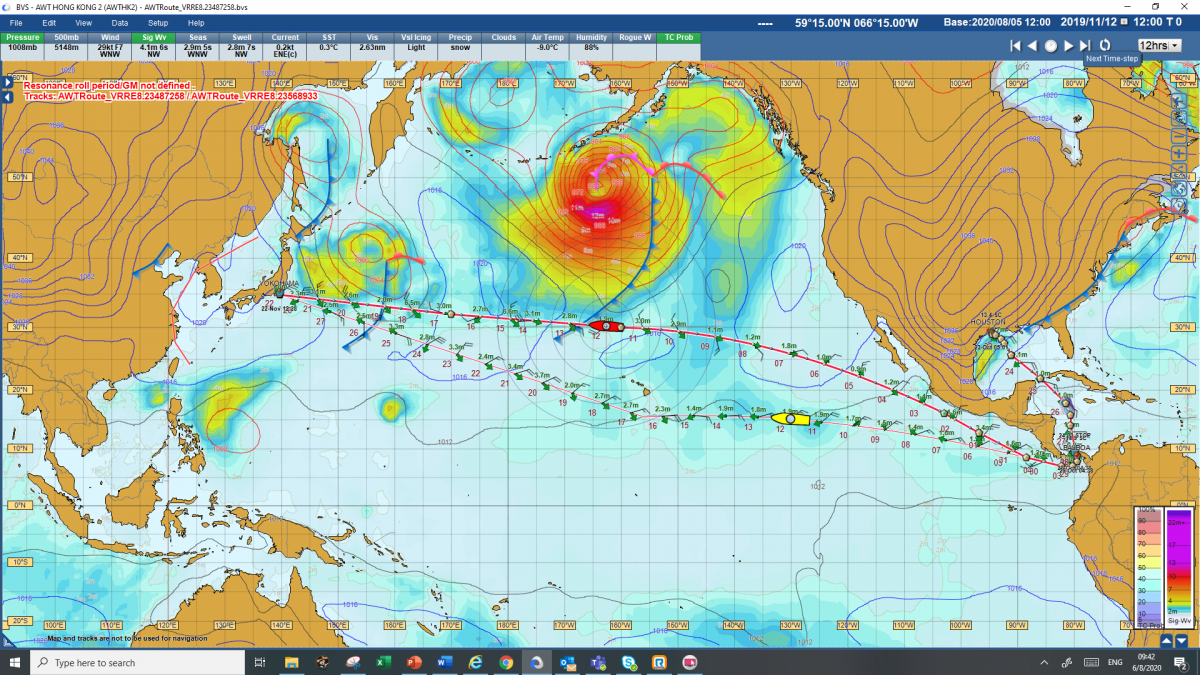 When the Northern Hemisphere transitions into winter, Arctic temperatures plummet from lack of sunlight. The colder Arctic then interacts more severely with the warmer temperatures of the equatorial region. The broad temperature gradient strengthens low pressure tracks from the Arctic to the mid-latitudes, carrying more intense storms across the world as a result.

Easterly trade winds increase in Northern Hemisphere winters as well, covering much of the ocean between the equator and 30°N latitude with choppy, short-period swells and strong winds. The northern oceans become overwhelmed by widespread areas of heavy seas, in some cases covering an area comparable to the continental United States.

The storms can have a great impact on vessel and cargo safety, fuel consumption, and timely arrival to the port of destination. For shipping vessels, avoiding these storms—and the heavy weather and seas they bring with them—is a top priority.

Why great circle routes are not always the best choice

A west-bound vessel choosing to sail along southern latitudes instead of a great circle route can add distances that can top 1000 nautical miles. However, by choosing this path during weather effects stemming from Northern Hemisphere winters, a vessel can find itself sailing with easterly trade winds at the stern, while avoiding heavier conditions at the bow. The vessel can then effectively reduce sailing time by several days, saving clients time and money, protecting the lives and property at sea, and reducing global fuel emissions.

The tanker followed StormGeo’s advice, following a southern latitude route which added around 600 more nautical miles than the great circle recommended by the ship captain. However, the southern route allowed the vessel to sail at a speed 1.45 knots higher than that expected along the northern route, saving 65 MT of fuel and 195 MT of CO2 emissions.

As a result, the tanker was able to avoid prolonged heavy weather and gain positive wind and current assistance. In the end, with StormGeo’s help, the vessel arrived 49 hours earlier than the projected great circle route arrival time, leading to a total savings of roughly $54,000 USD.

Want to learn how route optimization can save you time and money?
Contact Us
Learn more about our ship routing services