The Effects of Tropical Cyclones on Shipping - StormGeo 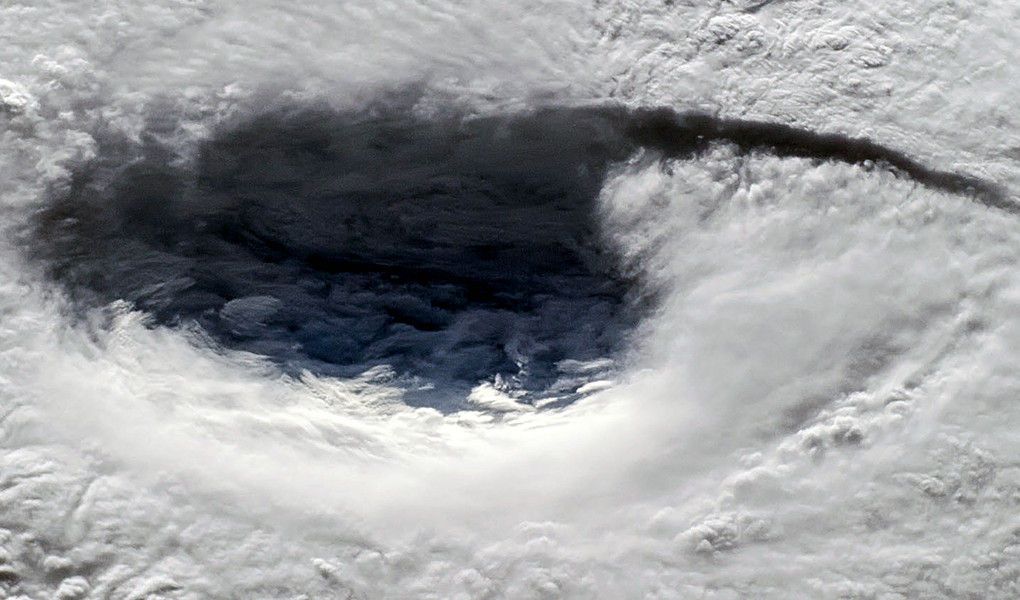 The Effects of Tropical Cyclones on Shipping

All too often when watching the evening news, we may hear of a tropical storm raging in the open ocean but far away from land. While the millions shore-side breathe a sigh of relief, those onboard the worlds’ fleets know they will have to be vigilant if the storm is heading their way or on their intended route.

Tropical Cyclones have an enormous impact on ships and shipping logistics. Entire supply chains can be disrupted when ships are delayed due to the presence of a cyclone, affecting thousands of people. Empty shelves at a grocery store due to Hurricane Irma

The images below show the heavy traffic of ships using StormGeo Ship Routing Services off the coast of the Philippines. 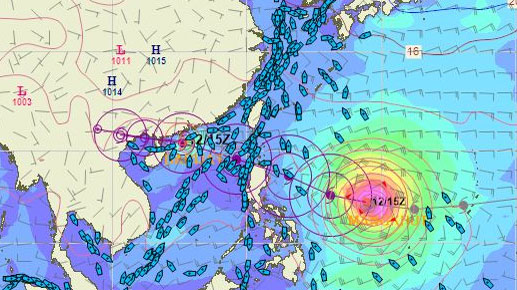 On September 12, 2018, with a cyclone over the Philippine Sea, there was an uninterrupted flow of traffic proceeding north and south through the South China Sea. 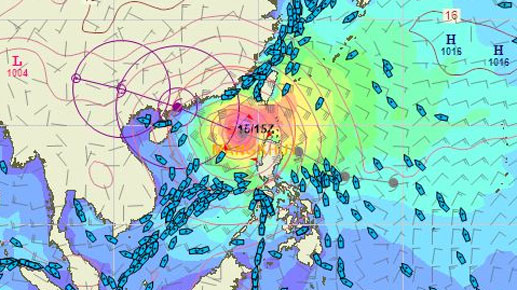 Two days later, there is a gap where the cyclone has moved west, causing all traffic to stop. The storm wrought havoc in many regions, including the Philippines and Hong Kong.

This example illustrates how a tropical cyclone can cause significant stalling to ship movement—an occurrence that is replicated around the world.

While accurate forecasts depend on a blend of technology and experience, ship captains know that storms have navigable and dangerous semi-circles. The image below shows a classic northern hemisphere storm and indicates that when sailing north and east of a cyclone, a ship is in the dangerous semi-circle due to a cyclone’s propensity for recurvature. Storms may track WNW at 5-10 knots for days before recurvature starts, and that recurvature process starts out slowly. However, the recurving cyclone typically speeds up, sometimes in excess of 40 knots, which would bring all ships in its path into a dangerous situation.

There are exceptions to this rule, thus all available data should be scrutinized when determining the best course of action for storm avoidance. Take the following situation from October 4, 2018: 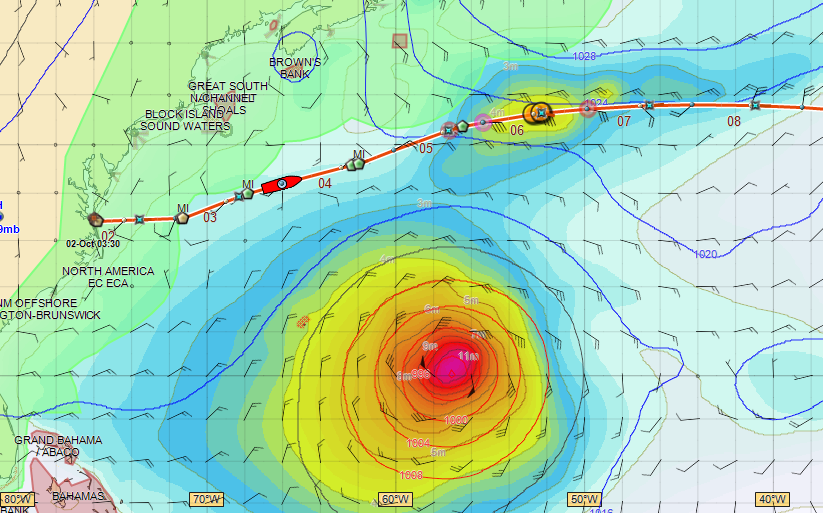 The ship is heading eastbound towards the Mediterranean Sea, and proceeding along the shortest route seems to place the vessel into the dangerous semi-circle of the storm. However, forecasts were very consistent in indicating that the storm would not take the typical NE course and would instead turn ESE-ward in the days to come. 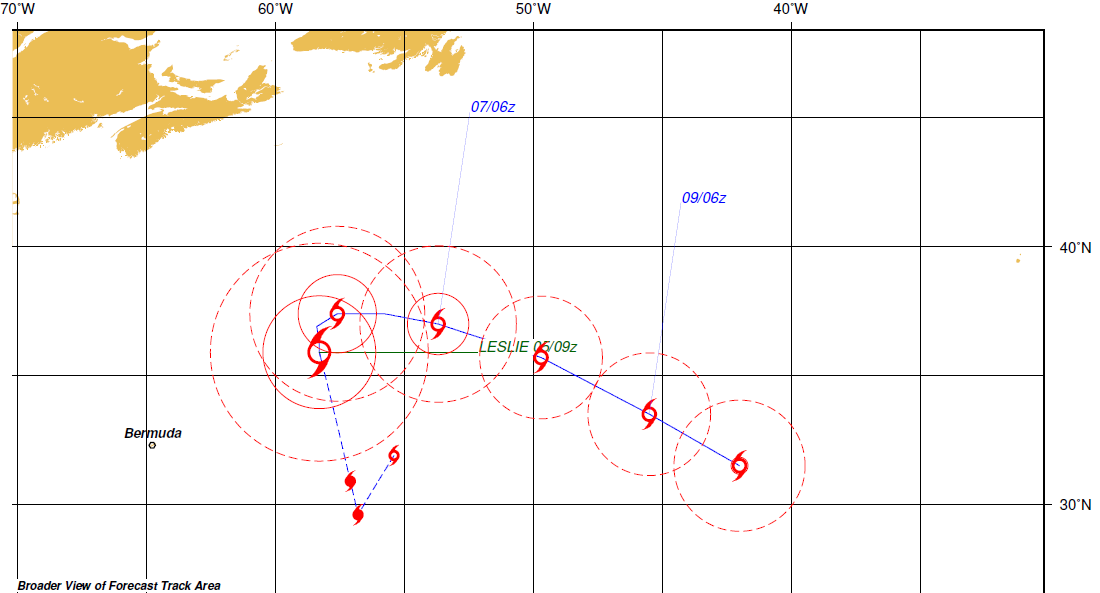 If the ship were to attempt to pass south of the storm’s track (seen below), an additional 2.5 days of sailing and 80 MT of fuel oil would be needed.

Surprisingly, this storm had an impact on all ships sailing through the western ocean. Within 24 hours, the storm moved NE at 40 knots.
Ships sailing from the North American Pacific Northwest towards Asia were forced to take advance action to avoid the storm. 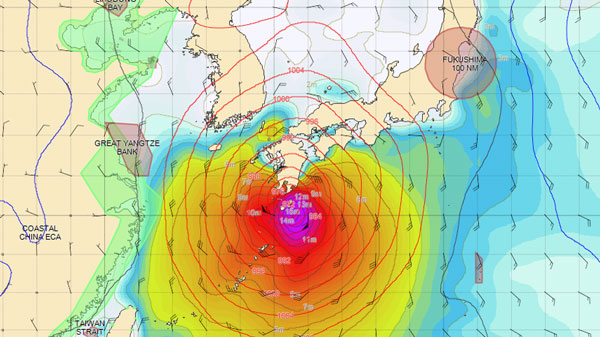 We see in this image that one ship’s (indicated by the yellow icon) took advanced action that enabled it to sail north of Hokkaido and avoid the typhoon.

The more customary track south of Hokkaido (represented by the red ship icon) shows the more customary route where ships would have encountered typhoon-force winds and phenomenal seas. At least 200NM would have been added for southerly clearance of the storm with at least a 12-hour delay and an additional 50 MT of fuel consumed.

Even on this delayed course, nine meter head waves would still be encountered with increased risk to the crew, vessel and cargo. 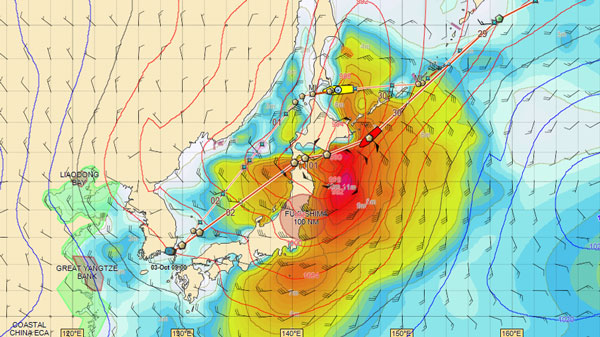 Fill in the form and we get back to you.
learn more about our weather routing services

Why Routing Advisory is Crucial to Every Captain

During the last 15 years, meteorology has made remarkable progress in terms of forecast accuracy, directly impacting the shipping sector and more specifically, route planning.