Understanding the Danger Area Around a Tropical Cyclone - 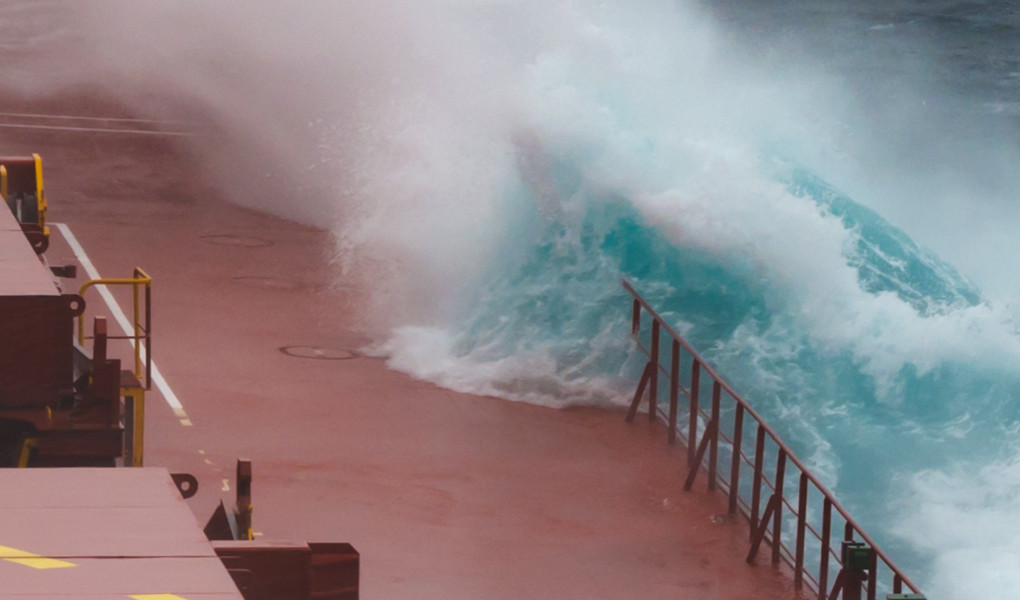 Understanding the Danger Area Around a Tropical Cyclone

With an average 100 tropical storms every year across the globe’s oceans, it’s understandable that seafarers consider them to be one of the most dangerous meteorological phenomena they can encounter. Unfortunately, the oceanic areas most affected by tropical cyclones also see some of the highest levels of marine traffic (take the Northwestern Pacific, for example). This highlights the enormous impact tropical storms have on the commercial shipping industry.

For example, maritime transport in the South China Sea was greatly disrupted by Typhoon Mangkhut in September 2018. In order to avoid the “Danger Area”, the crucial question for every master is how and where a tropical cyclone will move. What do we call “Danger Area” and how close can we get to a Tropical Cyclone at least?

These images taken from the StormGeo Operational Center shows Typhoon Mangkhut first over the Philippine Sea, allowing for an uninterrupted flow of traffic through the South China Sea. Two days later, the cyclone has moved west, causing all traffic to stop. 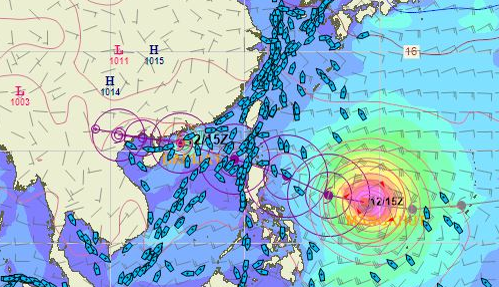 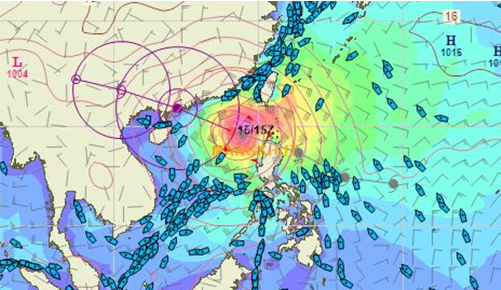 For example, if the maximum wind inside a cyclone is 110 knots and winds 120 nautical miles from the eye are 34 knots, the danger area has a radius of 120 nm. This means that the ship should never come 120 nm or less from the tropical cyclone. This danger area around tropical cyclones is rarely symmetrical and can vary within semi-circles or quadrants.

Official meteorological services can provide forecasts and advisories where the danger area is clearly defined, allowing the master to direct the vessel accordingly. However, this information is usually provided in a textual format rather than graphical, leaving the master to draw both the track and the danger area around a cyclone—not always an easy task for an overloaded master. Typhoon Mangκhut shown in Classic BVS. The danger area (wind > 34 KT) is marked as purple and its radius is 215 nm.

Fortunately, modern tools are available today to provide this graphical representation, such as the BonVoyage System (Classic BVS) and StormGeo’s recently launched NaviPlanner BVS. The BVS family provides the only on board application in the shipping market that graphically displays the danger area around a tropical cyclone based on official meteorological advisories. This means that official information is incorporated into the map with the other meteorological parameters and the vessel's track, one hour the latest from the official release.

If the Master has questions or specific requirement for a passage, speaking to a person rather than a computer is often preferred. That’s where StormGeo’s Route Advisory Services come into play—a shore-based routing service that gives the Master access to global experts who route more than 5,500 routes every month.

StormGeo Greece organizes BVS workshops on a regular basis in which extra time is devoted to tropical cyclones. Check out dates and availability here.