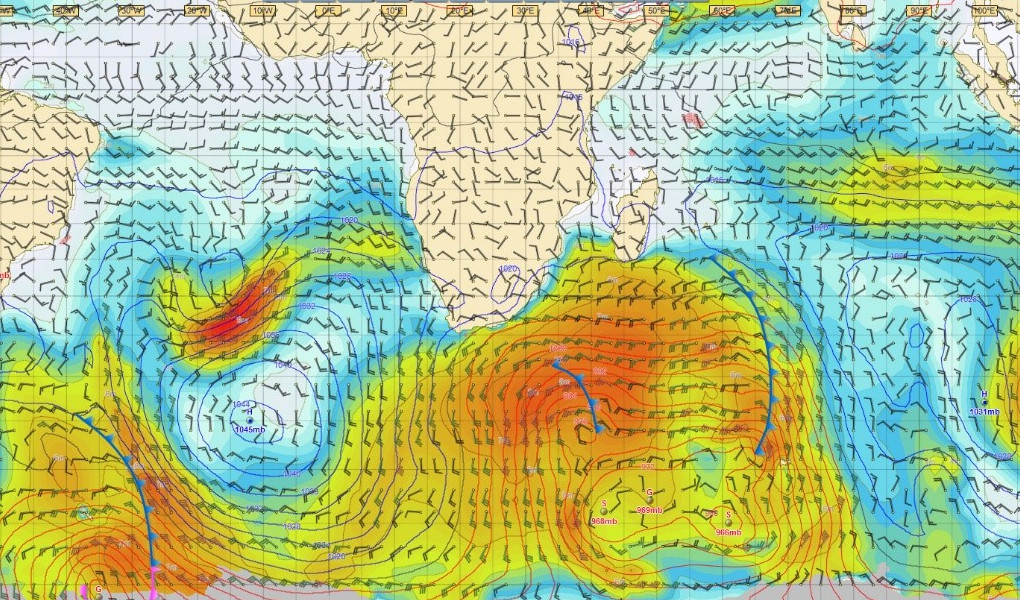 The Southern Hemisphere winter months according to the Jovian Calendar are June, July and August.

As the madness of the winter season turns its attention from the northern hemisphere to the southern hemisphere, we expect to see changing weather that can create very turbulent sea conditions.

In the snapshot below, nine to ten meter SW waves can be seen off SW Australia. Seven to eight meter SW waves are prevailing just east of Africa, while eight to nine meter easterly waves are prevailing between 30S – 35S of the South Atlantic. Over the tropical Indian Ocean, where heavily laden ships are approaching Malaysia and Indonesia, five-meter waves from the east are hindering their progress. During the winter months, the waters south of Africa are accompanied by four meter waves or greater about 12% – 15% of the time.

With the weather changes comes a shift in routing philosophies. Routes from the coal ports of NE Australia frequently benefit from longer routes passing north of New Guinea. While longer in distance, the routes avoid the severe conditions south of Australia where ships lose tremendous amounts of speed and more fuel is consumed as the ship speed is reduced by the continuous adverse conditions.

While it may seem that there is only one way around South Africa, this is far from the truth. The South African Weather Service gives advisories regarding abnormal waves. However, ships sailing at Eco-speed may need additional time to ensure they are sailing along a route which would limit exposure or avoid an area prone to freak waves altogether.

For example, a ship would want to avoid the waters near the Agulhas Core between Port Elizabeth and East London during periods of strong SW swells, as the swells run against 2+ knots of current setting southwestward. As can be
seen in the above image, the waves running against the swell can generate freak waves with catastrophic results. Proper weather routing advice can help ensure Eco-steaming is done safely and effectively and help give captains information well in advance to help avoid such high risk wave areas. As the IMO indicates in their Guidance for the
Development of a Ship Energy Efficiency Management Plan (SEEMP):
Section 4.4 Weather routing has a high potential for efficiency savings on specific routes. It is commercially available for all types of ship and for many trade areas….

StormGeo encourages awareness to all whose routes bring them on a tour of the hemispheres to ensure safe passage and fuel efficiency. StormGeo route analysts / advisors are on call 24/7 365 days a year!

Contact Us
Have Questions on our Route Analyst, global operation centers or want to request a route?