Protecting the Dolphins at the Texas State Aquarium - StormGeo 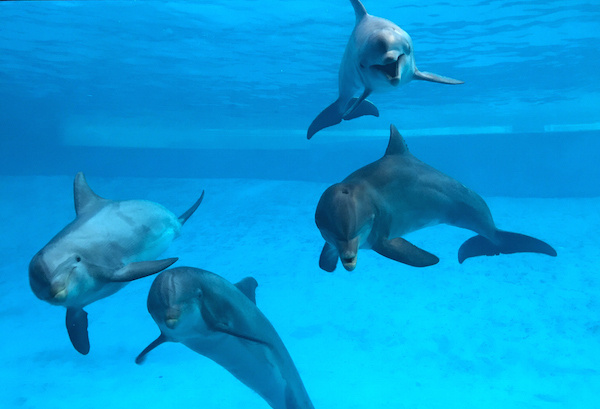 Protecting the Dolphins at the Texas State Aquarium

When Hurricane Harvey was threatening Corpus Christi and the Texas State Aquarium, the aquarium's emergency staff turned to StormGeo for support in protecting their animals, guests, staff and facility.

The Texas State Aquarium is located on the Coastal Bend of Texas in Corpus Christi, in an ideal location on the Gulf of Mexico. With beautiful beaches nearby, the aquarium enjoys year-round tourism with visitors coming from all over the world to see animals with habitats ranging from the deepest oceans to the African Savanna.

Being located directly on the coast also creates significant challenges for the aquarium. With many areas only a few feet above sea level, hurricanes and other forms of tropical weather pose a serious threat.

In late August of 2017, powerful Category Four Hurricane Harvey was threatening to make landfall in the Corpus Christi area. In the week prior, Harvey had weakened substantially, leading many to believe the storm was no longer a threat. StormGeo’s 24/7 Forecast Operations Center was aware of the continuing potential for danger, and was able to fully support and communicate with the aquarium’s Emergency Operations staff before, during and after the storm.

The aquarium’s Director of Operations, Justin Sefcik, relates how they remained vigilant—continuing to receive storm updates and support from StormGeo meteorologists. “We started tracking Harvey as it came through the Atlantic and noticed that it had somewhat dissipated as it went across the Yucatan Peninsula. However, we saw that StormGeo had not stopped tracking it and thus were able to give us valuable information on what the storm was doing as it entered the Gulf of Mexico.”

Of the many concerns for the aquarium, perhaps the largest was for the safety of the four bottlenose dolphins, Kai, Shadow, Liko, and Schooner, that call the aquarium home. Leaving them in their outside tank, exposed to the elements, was not an option.

“One of the largest considerations that we have during a hurricane is the transport of animals," says Sefcik. "In particular, the dolphin population that we have here is a very large consideration. As Harvey approached, we had to make a crucial decision, which luckily, StormGeo and their updates were able to help with immensely.

What we decided to do was shelter the dolphins in place—moving them from their outdoor exhibit that overlooks Corpus Christi Bay to a secure location that was inside the facility in conditioned space.”

Keeping the dolphins on-site avoided costly off-site transportation, as well as a potentially stressful situation for the animals. This on-site response plan was so successful, it is now the primary plan for any future hazardous situations.

“As one of the leading cultural institutions in south Texas and one of the largest aquariums in the United States, we take the safety of our guests and animals very seriously. One of the things we have to be conscious of is the weather and the impact it can have on the experience here at the aquarium.

StormGeo allows us to be ahead of the curve in terms of our strategic decision making. It’s always nice knowing that we can pick up the phone, speak directly with a meteorologist, and have direct information coming out of Houston telling us exactly what they’re seeing and how it might impact the Texas State Aquarium. Knowing that allows us to make those decisions with confidence and move forward knowing our animals, guests and staff and volunteers are all safe,” concludes Sefcik.