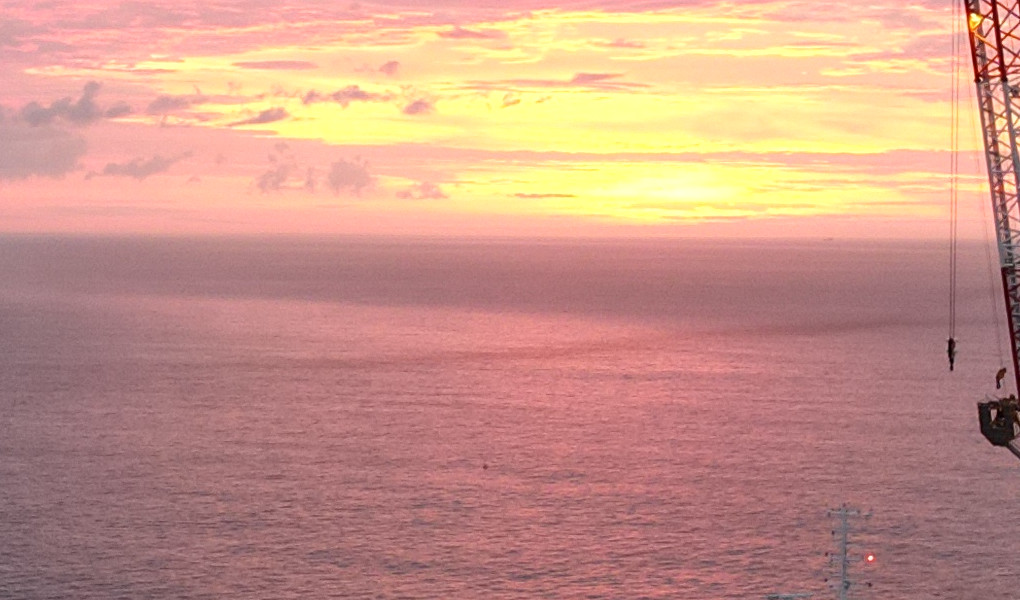 Offshore wind is taking off in the USA, thanks in large part to the expansion of Danish offshore wind giant Ørsted into the US market. Ørsted’s US venture began with the Coastal Virginia Offshore Wind (CVOW) pilot project in 2020. CVOW was constructed by Ørsted on behalf of Dominion Energy. The project was enabled in part through a collaboration with StormGeo.

Offshore Wind Project in the USA

The development of offshore wind in the US today looks a lot like it did in Europe a few decades ago. Responding to the pressures and public attention around climate change, governments in both parts of the world implemented green friendly energy policies.

Interested in how we support the offshore wind industry?

StormGeo was brought into the CVOW project early in the development process. Ørsted had already collaborated with StormGeo on several projects in Europe, and was pleased with the service’s forecast accuracy, user friendliness, and back-office support.

In all phases of developing an offshore wind farm—planning, construction, commissioning—it is essential to know the weather conditions on site. The project involves many different suppliers and stakeholders who need easy access to accurate and reliable weather forecasts.

Ørsted was convinced that the integration of live data into weather forecasts went a long way to improve short-term accuracy, and StormGeo had proven in Europe that it could deliver.

We’ve used the StormGeo portal extensively on the project. It has helped us to provide weather forecasts and live weather warnings at three separate locations, with a tool that is reliable, accurate and easy to use.
Sam-Anderson Hall
Ørsted CVOW Construction Manager

The importance of weather expertise in offshore wind planning

Ørsted’s Europe-based entities were already familiar with the layout of StormGeo’s forecasts, and were able to integrate them easily into their dayto-day work in the US. The flexibility and user-friendly set-up of StormGeo’s services were key to enabling a smooth collaboration between teams.

“As the project manager responsible for weather forecasts and measurements on CVOW, I can say that the collaboration has been excellent,” said Ørsted’s Julian Ralf Jensen. “There are different forecast needs among a variety of end-users, and StormGeo has been very accommodating in meeting those needs.”

In projects like CVOW, local weather expertise can often be overlooked. This can lead to delays and even incidents, pushing logistical setups to the limit. Having a local meteorologist available 24/7 to provide guidance on how to safely and effectively complete operations can be a gamechanger.

Ørsted found the seamless integration between StormGeo systems and its own wave buoy measurements to be particularly useful. “StormGeo was able to adjust forecasts based on live buoy observations and Ørsted’s own specialists,” said Jensen. “These processes have significantly increased the reliability of the weather forecasts.”

Speak to one of our experts today.

The collaboration between Ørsted and StormGeo touched on a number of tasks throughout the CVOW project.

It can take up to an hour and a half to rig up a blade lifting yoke, then attach it to the blade. Installing a blade can take a similar amount of time. Because of their confidence in the weather forecast, Sim’s team was able to plan ahead and have a blade rigged in time to take advantage of weather windows which often were as small as two hours.

“StormGeo is regularly very accurate,” Sim said. “They enabled us to take advantage of small decreases in wind at the earliest opportunity in order to complete any work scope.”

Ørsted CVOW construction manager Sam-Anderson Hall has found StormGeo’s assistance to be invaluable. “We’ve used the StormGeo Vortex tool extensively on the project,” Hall shared. “It has helped us to provide weather forecasts and live weather warnings at three separate locations, with a tool that is reliable, accurate and easy to use.”

StormGeo is regularly very accurate. They enabled us to take advantage of small decreases in wind at the earliest opportunity in order to complete any work scope.
John Sim
Ørsted WTG Commissioning Engineer

While Ørsted had plenty of experience constructing wind farms in Europe, going to the US meant dealing with some types of severe weather unfamiliar to most European countries. Fortunately, StormGeo was well prepared.

“Our forecasting center in Houston, Texas, had already been predicting local weather for marine operations along the US coastline for decades, including hurricanes and tropical storms,” explained Anna Hilden, StormGeo’s Global Industry Manager of offshore wind. “All we needed to do was to give the team an introduction to the unique needs and sensitivities of offshore wind, and we were pretty much up and running.”

Before Sam-Anderson Hall began working on the project, he had worked in the North Sea, where he was not used to the humid, thunderstorm-prone conditions experienced by the Virginia coast. “I particularly like the lightning monitoring function and the daily TropicsWatch video summary,” said Hall. “It’s been a huge asset to receive detailed, long lead time reports on all developments coming our way from the Caribbean.”

“The level of detail available in the daily video briefing left us well-informed and well-prepared,” said Hall. “I really can’t understate how important this lead time is in a well-planned and controlled severe weather response plan.”

Staying ahead of modern-day challenges

Throughout the industry, offshore wind can become a flashpoint in local politics, and what may seem like a relatively simple project may become embroiled into a large political debate between mayors, city councils, citizens’ groups, or even within a state senate or governor’s office.

”While political obstacles can be common, CVOW has not run into these issues as other offshore wind projects have in the past,” said Hayes Framme, Ørsted’s Senior Government Relations and Communications Manager for North America. “The project has support in the legislature and in the Governor’s office.”

COVID-19 is a challenge experienced by all industries. Health and safety is and always will be a top priority for Ørsted,” said Framme. “We have worked with our suppliers to ensure we are following all national and local regulations in regards to working through COVID-19.”

While Ørsted and its suppliers have taken steps to adjust to the new reality, they have not seen substantial impacts to the supply chain. “StormGeo provides increased certainty in the data we receive,” said Framme, “which helps inform our timelines related to COVID-19 and other impacts that may arise.”

The future of US wind farms

The CVOW project is the first wind farm to be installed in US federal waters, and the only fully permitted project in the US. This places Ørsted at the forefront of developing, permitting, and installing offshore wind farms off the US coast.

“This project is highly exciting for us at StormGeo,” said Anna Hilden. “Ørsted really knows what they need and pushes us hard to do our best every day. We’ve learned a lot from our collaboration, and it’s been tremendously rewarding.”

From working with federal agencies on building a framework to permit offshore wind, to working through challenges unique to the US market not yet experienced by European developers or suppliers, the CVOW project has taught a lot of important lessons to both project participants and the regulators charged with the oversight of offshore wind.

“This is the first in a long pipeline of projects Ørsted and other developers will be working on over the next few decades off the US East Coast,” said Hilden. “We’re learning so much from the CVOW project, which we’ll take with us as the offshore wind market takes off in the States.”

“While starting in a similar place in Europe, the U.S. offshore wind landscape now seems to be moving at a much faster and grander pace,” said Framme. “As governments, suppliers, and the general public realize that commercial scale offshore wind can play a critical role in combating climate change, creating jobs, and be a reliable form of energy, we expect states will set even more ambitious offshore wind targets.”

Do you have a question or would like a demo of our forecasting tools for Offshore Wind? Speak to one of our experts today.

Fill in the form and we get back to you.
Learn more about our products and services