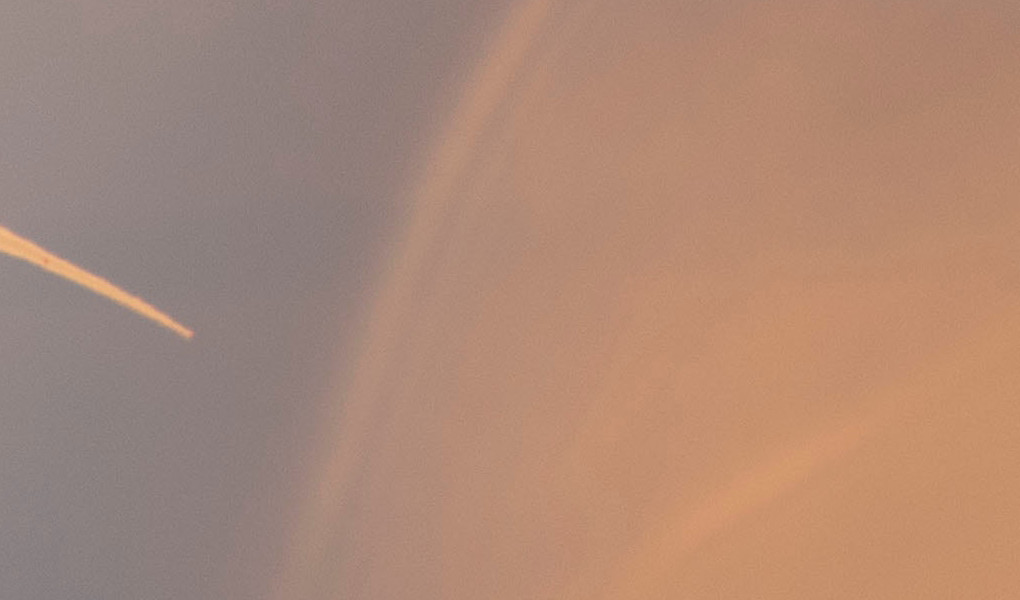 Once considered a costly alternative to onshore wind power and largely limited to Europe and Asia, offshore wind is starting to show promise as a clean, cost-competitive choice for electricity generation in smaller countries and regions, thanks to rapid improvements in technology and a steady reduction in costs. With a surge of projects in development around the world, one emerging market that stands out as a new frontier for the industry is Taiwan.

In 2009, the Taiwanese government passed the Renewable Energy Development Act (REDA) aimed at increasing the installed renewable energy capacity in Taiwan to 9.95 GW by 2030. This energy mix included solar, onshore wind, offshore wind, biomass and hydro energy. While currently still reliant on fossil fuels and nuclear, Taiwan’s President-elect Tsai Ing-wen said in January 2015 that her party aimed to phase out nuclear power by 2025 and to increase the share of renewable energy generation to 20% by that year.

The official government plan laid out in 2016 was a bit more conservative, calling for generating 15% of domestic power from renewable sources by 2030. This included plans to produce 4GW of electricity through offshore wind, which the Taiwan Ministry of Economic Affairs Bureau of Energy is working to build 1,000 wind turbines by 2030 to support.

StormGeo has been part of the industry’s development in Taiwan from the very beginning, helping to support the first commercial-scale offshore wind project, Formosa 1. This involvement was largely due to StormGeo’s decade-long experience in European offshore wind—supporting over 100 wind farms across the North Sea region with daily weather forecasting. 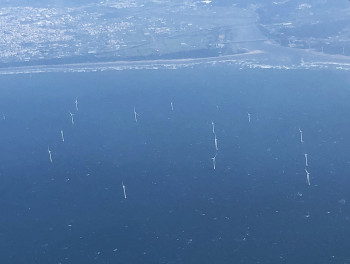 Formosa 1 first began operations as a demo project in 2017 with just two wind turbines. When forecasting support for the wind farm was first requested, it took only six hours for StormGeo to get the Vortex portal up and running, providing classic metocean forecasting as well as tropical storm support. StormGeo is now servicing the farm’s 32 turbines, with a total capacity of 130 MW, as well as two other approved offshore wind projects, Yunlin and Guanyin, owned and developed by Wpd.

Having tropical forecasting expertise is crucial, as Taiwan is hit by an average of four typhoons every year (some of the strongest in the Pacific). StormGeo has a strong foothold in protecting U.S. businesses during the Atlantic hurricane season, and decades of experience supporting the regional shipping industry in South-East Asia during typhoons and tropical storms. This expertise forms the basis of the tropical forecasting services that we deliver to offshore wind in Asia.

In case of a typhoon, the turbines, which are built to withstand the heavy conditions that a tropical cyclone can bring, pitch out of the wind so that the blades don’t catch the wind. When the wind reaches a certain level, 25-30 m/s for example, the turbines automatically shut down and pitch their blades accordingly.

StormGeo's forecasts and warnings are made up to seven days in advance—two days ahead of what most weather forecasters provide. Based on our detailed predictions of the timing and effects of a typhoon or storm, the project management team will decide whether to ask vessels working in the field to seek shelter or go to port. In addition, the project teams will know exactly when to take emergency response actions, such as stockpiling emergency supplies, re-organizing travel plans, securing goods on the quayside, etc.

Before the offshore wind development began, Taiwan had little experience with offshore operations, other than fishing and shipping. StormGeo’s forecasting expertise in shipping and oil and gas in Southeast Asia have provided the offshore competence necessary to assist Taiwan in building up their operations.

Why Taiwan is Fit for Wind Energy 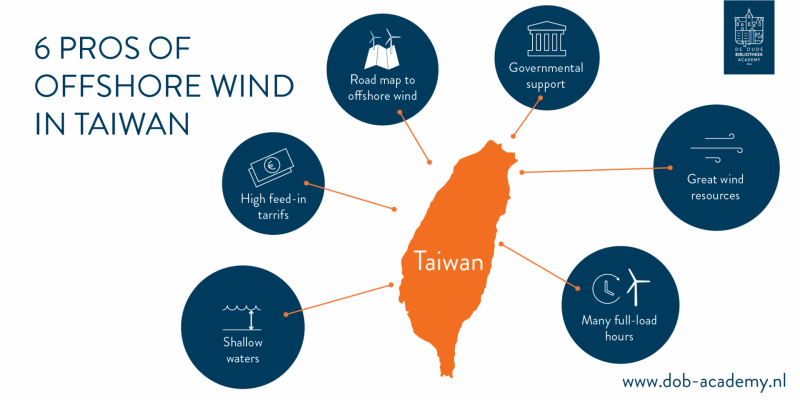 The Taiwan Strait and northern Taiwan have ideal wind and wave conditions for offshore wind as well as the shallow waters that are requisite for bottom-fixed turbines. This, plus a desire to drastically cut down their reliance on nuclear power and fossil fuels, make offshore wind the obvious choice. Reducing nuclear became a particular priority after Fukushima and due to the regular typhoons Taiwan faces. And as all fossil fuels must be imported, reducing their use has both economic and long-term sustainability benefits.

The Ma Ying-jeou government has co-opted the “Nuclear Free Homeland” policy by suspending construction of the Longmen Nuclear Power Plant (NPP4) and not seeking to extend the life-cycle of the three operating NPPs.

Taiwan’s openness to working with foreign companies enables the necessary transfer of knowledge, particularly from Germany, the UK, Denmark, the Netherlands and Norway. A detailed localization policy ensures that work is increasingly being done by Taiwanese companies and workers, and that knowledge is being transferred to help build up the local industry.

Challenges for Offshore Wind in Taiwan

According to Antoni Therattil, StormGeo Forecast Manager in Dubai (one of the operations centers that monitors Taiwan’s weather), Taiwan lies on the border of two climatic zones. “The northern part of the island has a subtropical climate with wet summers and dry, cool winters, while the southern region has a pronounced monsoon tropical climate with minor temperature changes throughout the year,” he says. Running across the entire west coast, the Taiwan Strait has several major weather challenges due to its synoptic features, tunneling effect and mountain range. “These include a strong wind regime, high seas, strong pressure gradient-induced wind and high seas/swell, thunderstorms and squalls, as well as low visibility during winter months.” 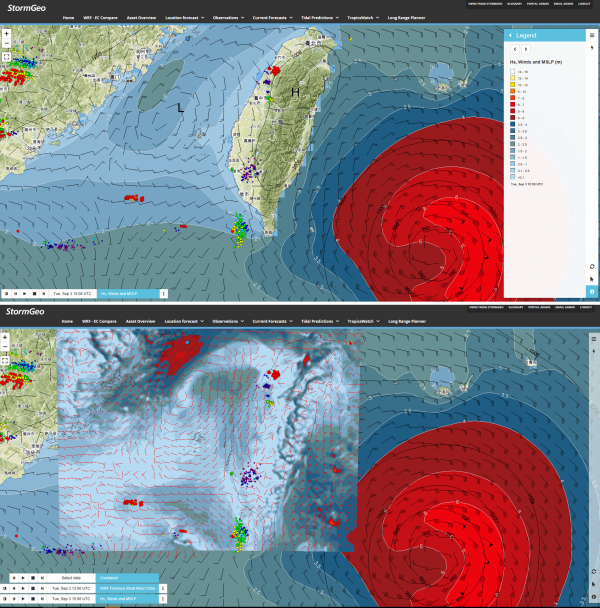 In a high-res weather model, more computer power is used to add grid cells to standard numerical weather models. Mælan likens the difference between the two models to building the Eiffel Tower out of large Duplo blocks or smaller Lego pieces. It’s the smaller pieces that produce a more realistic model.

Mælan stresses the importance of mapping the terrain correctly. “When we need to understand the complexities along a coastline, we calculate the weather from a higher resolution so that we can map the terrain closer to reality. It can be easy to miss small fjords or the tops of mountains, but winds travel into a fjord, not across it, and wind speed increases over the tops of mountains. If we have more detailed representations of these features, we can explain the wind patterns so much better.”

According to Bart Linssen, service manager for SolVent, a Taiwanese wind power firm invested by Enercon, there can be difficulties obtaining the necessary permits and approvals in a timely fashion. For example, every wind farm in Taiwan needs its own separate Environmental Impact Assessment (EIA), whereas in Europe, large-scale EIAs are conducted for land areas earmarked for wind-power development.

As StormGeo's Global Industry Manager for Offshore Wind, I recently spent a week in Taiwan visiting the wind farms StormGeo supports and saw how rapidly offshore wind is developing. I predict Taiwan could become more heavily reliant on renewable energy by 2025-2030, just as the government has planned.

According to data from the Bureau of Energy (BOE) under the Ministry of Economic Affairs, Taiwan’s renewable energy sector has grown in value by 195% between 2008 and 2014, increasing to NT$488.4 billion (over US$15 billion) in annual revenue and creating nearly 70,000 job opportunities. The BOE forecasts strong growth for these industries, reaching NT$1 trillion by 2020.

StormGeo currently has an office in Taiwan, with offices across Asia-Pacific that are capable of supporting offshore wind across the continent.