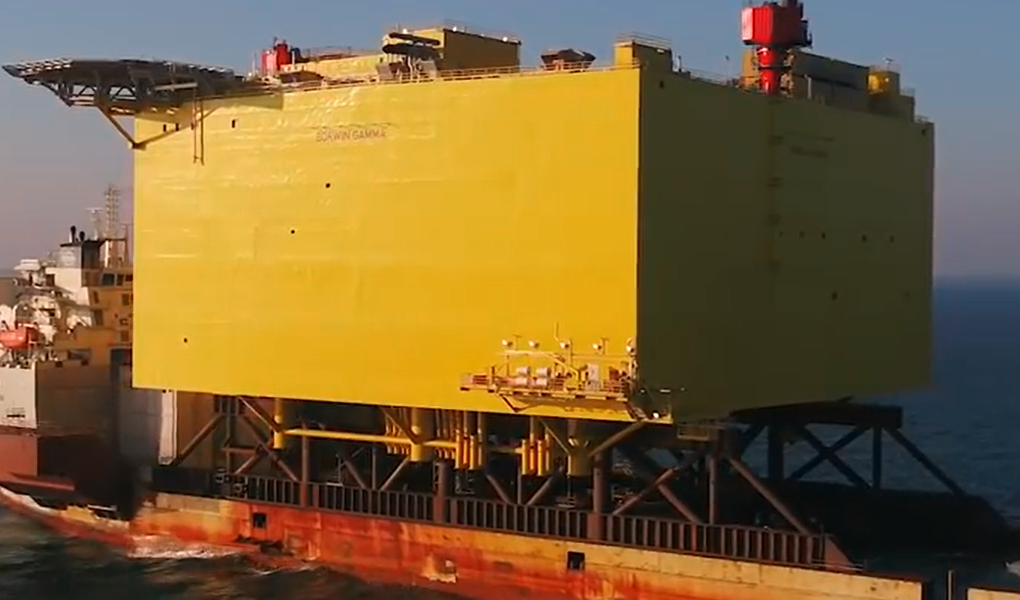 During the loading, transportation and installation of a 19,841-ton mega-structure that traveled from Dubai to Germany in October, StormGeo provided crucial weather services, including on-site and location forecasts, as well as vessel route forecasts.

Manufactured at Dubai Drydock World shipyard, the BorWin Gamma is a high-voltage DC converter that will transmit approximately 900 megawatts of electricity from offshore wind farms in the North Sea to mainland Germany. Scheduled to go online in 2019, the platform will house a high-voltage DC converter station that will convert alternating current produced by wind turbines into direct current, which will then be transmitted onshore to the German national grid.

The vessel route forecast provided by StormGeo to COSCO covered the journey from Dubai to almost 80 miles off the German coast. StormGeo’s team of forecasters in Aberdeen, who have been reporting for the region for many years, helped to issue the operation’s forecasts.

A bird's eye view of the BorWin gamma offshore converter platform on its journey from Dubai to the North Sea. Along with a 900MW connection for two offshore wind farms, the BorWin gamma will go into operation in 2019 and be able to supply more than one million households. (Source: Petrofac)

The topside (part that was loaded onto the jacket) was manufactured by Petrofac and has taken over 13.5 million man-hours to construct, using 11,574 tons of steel — more than that used to construct the Eiffel Tower. It used enough paint to cover 30 football fields and 546 miles of cable inside the platform, which could cover the distance from Hamburg to Milan. The mega-jacking and load-out of the topside was one of the heaviest and biggest jacking lifts undertaken in the Middle East.

When the platform was installed at its final destination in the German Bight on October 11th, StormGeo again provided on-site services along with location forecasts.

StormGeo Senior Meteorologist and Offshore Met-Ocean Specialist Rajkumar Sivaprahasam, who is based in Dubai, served as the project’s on-site forecaster. “My main role was to quickly understand the operation process and correlate the weather parameters that could affect it,” he says.

“Planners from each agency needed to fully understand the weather prognosis — why the suggested weather window was plausible and what the variance could be,” explains Sivaprahasam. Researchers from Shanghai Jinting Technical University were hired by DNVGL to measure waves, tides and currents in order to validate these forecasts.

Martin Q. Grønnevet, StormGeo’s Vice President of Operations & Client Services, also played a role in keeping the project running smoothly. “When such a large vessel with an even larger payload has to enter the platform jacket, install the structure and move out, weather plays a major role,” he says.

The BorWin Gamma being successfully installed at its final destination in the German North Sea. (Source: Petrofac)

“The COSCO team had very difficult weather thresholds for wind, swell, tide and currents for the dynamic positioning of the vessel. StormGeo supported the team in its decision to go ahead with the float-over during the weather window advised by the on-site forecaster,” says Grønnevet.

While this is the first time a semi-submersible ship has been used to transport such a converter and the first time that COSCO has performed such an operation in the North Sea, StormGeo has been a weather forecast provider for many such ‘load-out and float-over’ operations for oil rigs across the world.

Grønnevet continues, “As the North Sea is not a region with relatively calm weather windows for extended periods, if the operation had not been completed within the first available weather window, one can only imagine the cost overruns that would have ensued.”

Despite the presence of a Medicane  (a rare tropical-like cyclone) in the Mediterranean Sea and a low-pressure system over the UK and North Sea, StormGeo provided routing that enabled the vessel to avoid both weather systems.

“This project is a great example of how a set of forecast products can be customized to create the right blend of services that support an operation,” concludes Grønnevet.

Interested in learning more about how weather routing can save an average of 2-4% in fuel costs?
Route Support: Get there safely & efficiently
Related Articles

Voyage Routing Decisions Made Simpler and Safer with Weather Services

StormGeo and Seatrade Maritime News discuss the two major factors that generate waves and are dangerous to a ships: tropical cyclones and frontal passages, as well as how weather routing can mitigate the risks of these conditions.

Wording is everything when it comes to maritime disputes, especially those involving speed and fuel consumption. Anyone who works in this area knows that words like “about” mean different things to different people and can cause a lot of angst.

Changing course to save $64,000 with recommended StormGeo route

During the fall of 2017, a StormGeo client, a container transportation company, took a Transatlantic voyage to Bremerhaven in northern Europe. From Halifax to BremerhavenUpon departure from Halifax, the Master advised that the vessel needed to sail via the English Channel for pilotage considerations.