A sample advisory regarding Typhoon Malakas last year showed maximum winds of 70 knots in the JMA bulletin but was nearly 15% higher at 80 knots in the JTWC advisory. The difference is more understandable when the different wind methodologies are known.

Typhoons want to re-curve if given the chance. Once they do re-curve, they often want to do it quickly! 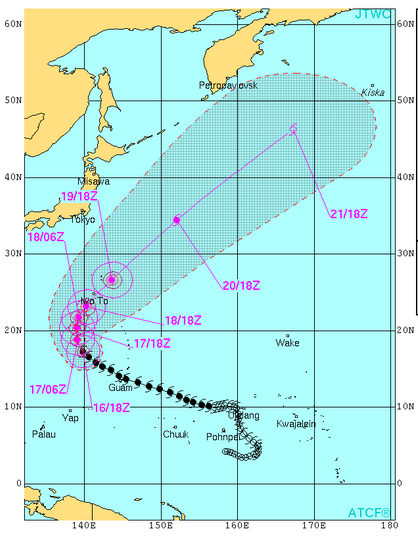 In fact, nature relies on this re-curvature process in order to dissipate the enormous amounts of energy that goes into heating the ocean surface to form and intensify the cyclone. As the overall ocean surface temperatures may increase in the years ahead, the process will be enhanced.

Therefore, when a tropical storm curves and moves into the mid-latitudes, encountering cold winds that cannot hold such enormous amounts of energy, the energy is released as wind and rain--and lots of both.

This can be seen in the following image as an Atlantic storm of moderate strength moves into the mid-latitudes, expands and becomes a major extra-tropical storm affecting many thousands of square miles.

Two tropical cyclones over the Atlantic on 07 October, 2016 Within a few more days, the second storm is a major extra-tropical storm covering a huge area over the central ocean with 15 meter waves in the area.

As this is a newsletter intended for the benefit of shipping companies in order that safety be maintained while avoiding unnecessary expenses, what can you do without being a cyclone expert? Getting you there safely and efficiently

Should a vessel prioritize a route for time or fuel? There are many factors that go into choosing the ideal route.

Part two of our ship routing strategy series looks into how a heavier vessel might have different options than a lighter vessel in the face...

In November of last year, a tanker vessel proposed taking a great circle route—the shortest path between two points on a globe--from the Panama Canal...

Now, more than ever before, it’s time to consider integrating plausibility checks into onboard event data reports

Now, more than ever before, it’s time to consider integrating plausibility checks into onboard event data reports