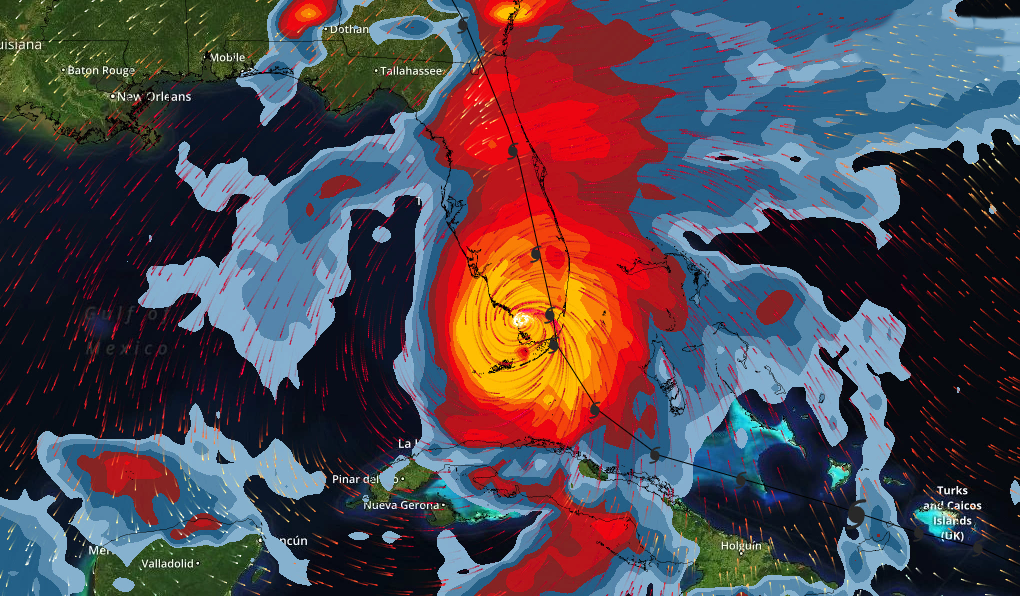 What are the conditions for the development of a Category 5 hurricane?
Low wind shear and high oceanic heat content. The latter is the actual fuel of these tropical systems. For Hurricane Irma, one of the most recent Cat 5 storms, there were ideal conditions during the entire track. When the storm increased to a Category 5, it was in an area where there was a sea surface temperature at least 2.7F above the seasonal average. This likely led to the final increase in intensity before making landfall.

How do hurricanes gather strength?
The "goal" for tropical hurricanes is to extract heat and energy from the oceans — releasing this heat back into the atmosphere. This happens using evaporation from the sea surface, convection and condensation in the atmosphere, as well as an extreme increase in kinetic energy, aka wind. Hurricanes are very delicate structures in that they do not tolerate winds blowing at different speeds or different directions above the center (wind shear). To develop into a hurricane, the winds aloft need to blow from approximately the same direction and at the same speed. This gives the young disturbance time to build a vertical column of squalls.

What key factors affect the storm track?
Upper level conditions in the atmosphere. The ambient steering winds in the mid and upper parts of the troposphere are what direct the track of the storm.

How does historical data help predict paths, if at all?
Historical data is of limited use because the ambient atmospheric state (placement and strengths of upper level ridges and troughs) that direct the track is constantly changing, and is by definition never exactly the same from storm to storm. Moreover, the oceanic heat content and the wind shear in the atmosphere are always changing.

What is the importance of using three global weather models?
Very! At StormGeo we use the American model, the Canadian model and the European model. The track and intensity of the storm is usually more uncertain the farther ahead you forecast. By gathering and analyzing several sources with the best available model data, you will get a much better assessment of the potential risks and areas affected.

How is StormGeo using satellite data?
We use satellite data to monitor tropical storms and use the satellite output to assess model quality (position and strength of the storm, and whether this is correctly diagnosed by models).

How do weather events abroad affect weather in the U.S.? (i.e. cold weather in Siberia)
El Niño is the feature that has the most notable effects on weather in the U.S. Technically, El Niño is the warm part of the oscillation in sea surface temperatures along the equator in the East Pacific. The effects are strongest in the winter after the onset of the event and includes cooler and wetter weather across the Southern U.S., warm weather in Southern Alaska, dry in the Pacific Northwest and wet weather across Southern California. (Source)

How is global warming affecting the amount, size or power of hurricanes?
There is no conclusive evidence that global warming is having any effect on hurricanes. Looking back over the past 100 years, there has been a definite increase in the number of hurricanes, however, this is likely due to better detection techniques. Prior to observing the Tropics with earth-orbiting satellites (the first weather satellite was launched in 1959) the knowledge of the existence of hurricanes and other tropical systems relied mainly upon the human eyes of those aboard ocean-going ships.

Can Atlantic hurricanes affect the weather in Europe?
Not likely, but in theory they could. The chance for that to happen is picked up by the longer-range models. In the end, these remnants may send heavy rainfall across Scandinavia or into the continent.

What is storm surge?
Storm surge is a dramatic push of sea water inland across coastal locations in relation to tropical cyclones such as hurricanes. A broad wind field circulating around the storm’s center can push massive amounts of water into the coastline. The severity of a storm's surge is affected by the storm’s intensity and wind field, as well as the shape of the coastline and the slope of the sea floor. Most injuries and deaths associated with tropical cyclones are related to storm surge.

Note: Because each location that might experience storm surge is different, storm surge can be very difficult to forecast with precision. Therefore, it is critical to heed the directions for preparation and/or evacuation from local officials.

During the course of Hurricane Florence's development through the storm's landfall, the StormGeo TropicsWatch team closely monitored the storm — developing real-time, daily video updates with forecasts and expected impacts.

During the course of Typhoon Jebi's development through the storm's landfall, the StormGeo TropicsWatch team closely monitored the storm — developing real-time, daily forecast updates with expected impacts. See each update, along with information on the history of typhoons in Japan.

Safety is paramount when a vessel is sailing in the vicinity of a large typhoon like Trami. Evasive measures such as vessel drifting, speed reduction and route alterations are common to avoid interaction with potentially damaging conditions.