A weakening La Niña, upper-level flow patterns and analog seasons point to a higher-than-normal risk of severe weather, including tornadoes, hail and damaging wind, in spring 2021.

It is officially spring, which brings warmer months and concerns from strategic planners and disaster relief personnel about the risk of severe weather. Our meteorologists have analyzed long-range weather signals to create their forecast for the U.S. These signals include Tropical Pacific water temperature anomalies, which can indicate potential severe weather risks for the U.S. During La Niña events (colder than normal water) in spring, there can be more severe weather outbreaks, compared to El Niño events when there are fewer.

For the upcoming severe weather season, we are under the influence of a weakening La Niña phase over the Tropical Pacific, which means that conditions could favor severe weather, such as thunderstorms, tornadoes, hail and strong winds.

These maps identify the regions of the U.S. that typically see more tornadoes and hailstorms during the period from March through May.

The areas from eastern Kansas to southeast Texas, across the northeastern parts of the South, and the Ohio Valley to the Mid-Atlantic have an elevated risk of severe storms, including large hail, damaging winds and tornadoes. Pay extra attention to the elevated risk areas extending from northeast Texas to the western Ohio Valley. This includes the cities of Dallas-Fort Worth, Oklahoma City, Tulsa, Little Rock and Memphis.

In addition to evaluating Tropical Pacific water temperatures, the StormGeo meteorology team looks at other long-range signals to establish “analog seasons” from previous years to compare to the current season. Since the end of 2020, our scientists have noticed an increased likelihood of a very active severe weather season for 2021 based on the projected flow pattern configurations from these analog seasons. 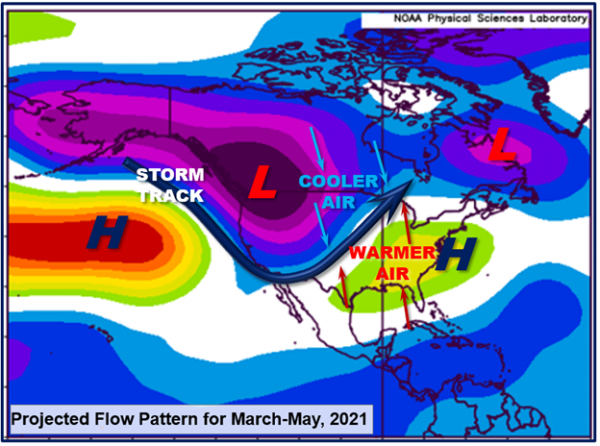 This graphic displays the projected flow pattern at 18,000 feet we are seeing for the prime part of the 2021 severe weather season.

We are expecting to see an anomalous upper-level trough (shown in the blue) over the Rockies and an upper-level high pressure ridge (yellow and green) over the eastern U.S. The interaction of cold air driving south and warmer air shifting north over the Plains and eastern U.S. produces a collision zone. This is an ideal setup for severe thunderstorms, especially in spring.

2011 is a primary analog season that we use, as it had a record number of tornadoes that year. This season also had one of the most devastating tornado outbreaks in recorded history, with storms in late April across northern Mississippi, Alabama and Kentucky. Several exceptionally long-track tornadoes devastated portions of the region. At this time, we cannot predict if a similar event of this caliber will occur this season. However, we can emphatically state that conditions do favor a higher-than-normal risk for large hail, damaging winds and tornado events this spring.

StormGeo forecasters have identified that the most vulnerable regions for severe storms this spring will extend from central Texas to eastern Kansas, northeast across the northern Deep South to the Ohio Valley, and eastward to the Mid-Atlantic from North Carolina to New Jersey. StormGeo meteorologists are constantly monitoring for weather patterns that can produce small or large severe weather outbreaks. Alerts will be issued to clients in those areas well in advance for your safety and protection during this potentially very active severe weather season.

Learn how StormGeo can help protect your assets and people with early, accurate severe-weather monitoring and alerts.

Site-specific monitoring and alerts to protect your assets and employees.

In this regularly updated forecast, StormGeo's Hurricane Forecasting team looks at current conditions across the Atlantic and Pacific as well as long-range patterns to identify...

Lessons learned from Hurricane Irma. Even if your organization wasn't directly impacted by a specific hurricane, there are still lessons to be learned.

Lessons learned from Hurricane Harvey. Even if your organization wasn't directly impacted by a specific hurricane, there are still lessons to be learned.