The State of the Atlantic Tropics, an Updated Storm Forecast - StormGeo 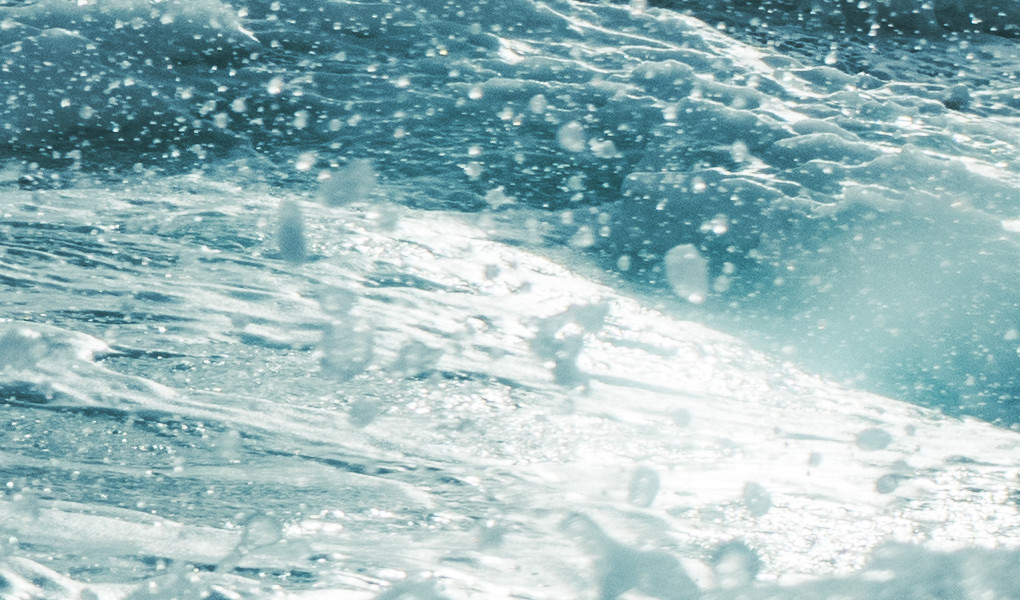 The State of the Atlantic Tropics, an Updated Storm Forecast

The below forecast is from the 2018 Hurricane Season. View the current Hurricane season outlook.

As we move into mid-July, hurricane season has been seasonably quiet across the tropics. Tropical cyclones are relatively rare from late June through early August, as can be seen in Figure 1. Tropical activity doesn’t typically begin in earnest until the second week of August, when wind shear diminishes, water temperatures reach peak warmth and moist air dominates the tropics. However, there are signs that conditions across the tropics, both in the atmosphere and in the ocean, may be more hostile toward storm development this season. 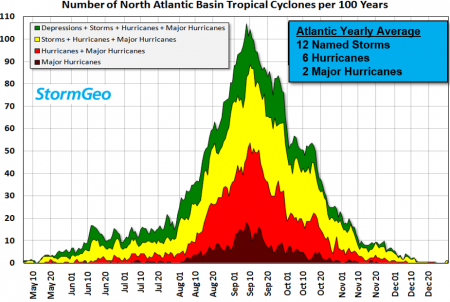 The Effects of Sahara Desert Winds

A top story in weather news over the past few weeks has been the Saharan Air Layer (SAL), an extremely hot, dry and sometimes dust-laden layer of the atmosphere that often overlies the cooler, more-humid surface air of the Atlantic Ocean. The SAL has drifted to reach as far west as the US Gulf Coast and even as far north as southern Canada.

Typically, each spring, northeasterly and easterly winds around the periphery of the Azores-Bermuda High in the central Atlantic carry dry, dusty air from the Sahara Desert westward across the deep tropics. This dusty air mass is 5,000–10,000 feet above the ground. This year, these dust outbreaks have been more frequent and stronger than normal. The tell-tale sign of its presence is the warm, pinkish hue to the sky at sunrise and sunset as the sun’s rays shine through the dust. Eventually, the dust will filter down to the surface over large areas and be noticeable only by those with freshly washed vehicles. 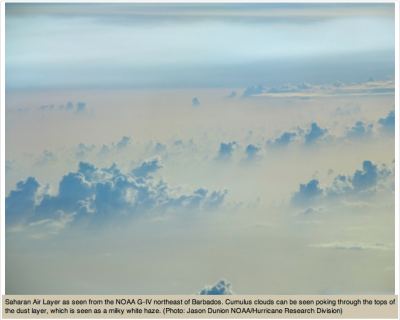 One of the main reasons that SAL outbreaks are stronger and more frequent this season is because the Azores-Bermuda High is stronger than normal. This creates stronger trade winds across Africa and the deep tropics, which drives more dry, dusty air westward over the ocean. In addition, the stronger trade winds increase low-level wind shear between the Caribbean Sea and Africa, another inhibiting factor for tropical development. These conditions will persist into the peak of the season (August and September), resulting in a continued hostile environment for tropical development.

These same winds are also responsible for upwelling cooler water, which is displacing the warm surface water from Africa eastward to the Caribbean Sea. In fact, water temperatures east of the Caribbean are the coolest observed since 1985 (Figure 3). As hurricanes require plenty of warm ocean water to intensify, this cooler water will make it harder for storms to strengthen over the open waters of the Tropical Atlantic this season. That’s good news for the residents of the eastern Caribbean islands, who were so hard-hit by Hurricanes Irma and Maria last season. With that in mind, perhaps the eastern Caribbean islands may catch a bit of a break this season. 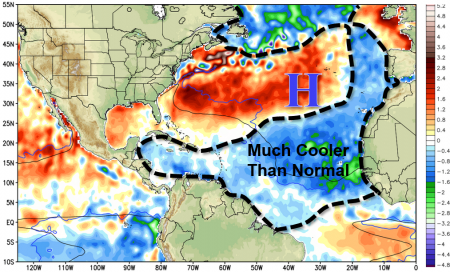 The combination of dry, dusty air in the tropics, stronger easterly trade winds and cooler ocean water temperatures translates to an Atlantic hurricane season that should be considerably quieter than last season. As mentioned, the threat to the eastern Caribbean islands appears to be significantly reduced this season. However, that doesn’t mean that there is no hurricane risk. Disturbances may develop farther west this season — either in the western Caribbean Sea or near the Bahamas. Hurricanes that develop farther west have a greater chance of impacting land, so there could be a slightly elevated hurricane risk from western Cuba up to the Bahamas and from the mid Gulf Coast east to the US Mid-Atlantic Coast.

No matter the forecast, StormGeo urges all who have an exposure to tropical storms to take the steps now to prepare at home and at work. Whether the tropical forecast calls for a busy season or a quiet one, it only takes one storm to change your life. Learn how to prepare your home or business for a tropical storm as well as some vital information about hurricanes.