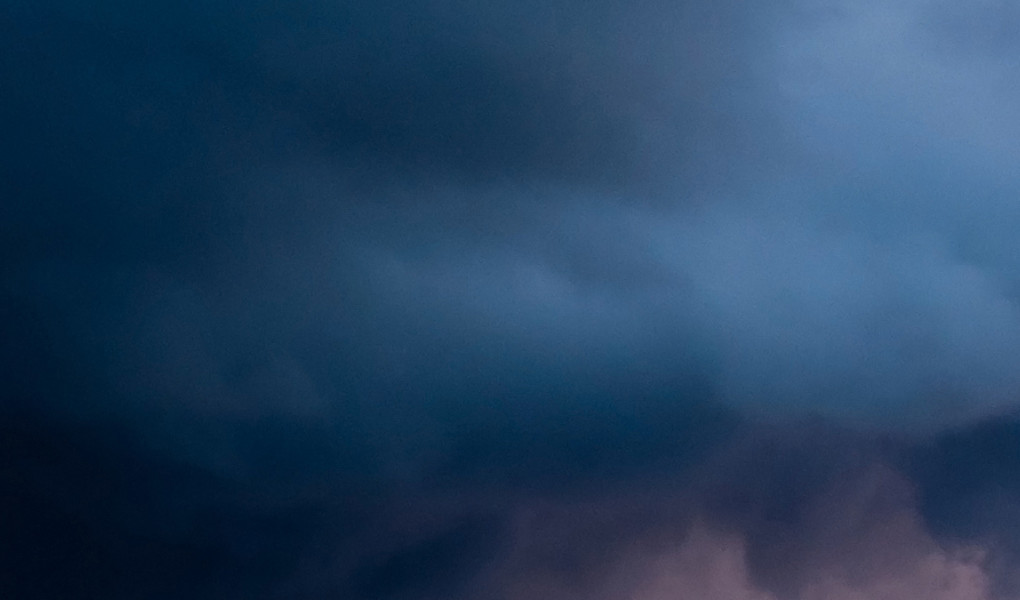 To better understand the science behind lightning and thunderstorms, as well as how to best be prepared for and be safe around them, Meteorologist Dave Gorham answers some FAQs about thunderstorms and lightning.

What is a thunderstorm?

Simply put, a thunderstorm is a storm or large cumulonimbus cloud accompanied by thunder and lightning. Thunder is the sound made by the electrical discharge of lightning — when air is forced apart by the electricity and then slams back together after the electrical current has passed.

Cumulonimbus clouds are very large and can have tremendous vertical extent, meaning some can grow to more than 60,000 feet high. They’re so big that that just one storm can flood a neighborhood or cause creeks to overflow from rainfall, while the lighting and wind can knock out power for thousands of people.

Looking inside a thunderstorm, one would see a very complex structure living and growing off of contrasts in temperature that drive incredibly powerful updrafts and downdrafts. These drafts of wind rush air up into the atmosphere, where water vapor and droplets freeze. These frozen droplets are then pushed downward, where they melt. These up and down movements cause friction, building electrical charges that create lightning.

How and why thunderstorms form and grow is well understood by meteorologists, but knowing exactly where and when they will form has always been a difficult question to answer. With advances in satellite and computer technology and knowing that thunderstorms happen approximately every hour around the world, thunderstorm forecasts are becoming increasingly accurate.

How do meteorologists forecast thunderstorms?

A thunderstorm needs two primary ingredients: heat (more specifically, a strong temperature contrast which leads to atmospheric instability) and moisture. If you can find someplace with heat, moisture and a reason for air to move upward you’re on your way to predicting thunderstorms.

However, the next part gets a bit trickier. Meteorologists must also analyze and measure these ingredients. Is there enough heat and moisture to create a storm? If so, will it be a small storm or many large ones? Is there enough for a broad line of thunderstorms to move across an entire state or will the storms last for just a couple of hours and impact only a small area? How much rain is possible? Will there be hail or tornadoes? Will the storms move fast or slow? At what time will they begin and at what time will they end? These questions all factor in when creating a thunderstorm forecast.

Can thunderstorms occur without lightning?

Thunder is the sound made by lightning, so it is not possible to have one without the other. If you hear thunder but don’t see the lightning, it may be obscured by a nearby mountain range or clouds. On occasion, lightning can occur during the daytime, which makes it more difficult to see.

How dangerous is lightning? Eucalyptus tree that was blown apart by a lightning strike in Australia.

Lightning kills hundreds of people around the world every year, but thousands are killed or injured due to the indirect effects of a storm. Not only is lightning very strong in both its electrical charge (as much as 100 million volts) and heat capacity (more than 35,000 degrees Fahrenheit), but it has also been observed to travel more than 10 miles from its originating cloud. The amount of electricity generated can cause a large tree to explode into splinters, while the heat can melt metal and turn sand into glass. It’s important to remember that lightning can move quickly, so although you are a good distance from where the storm was, you may still be at risk of a lightning strike.

What is hail and how does it form during thunderstorms?

Hail is ice composed of frozen rain drops that have endured a repetitive freezing/melting process. It’s quite violent within a thunderstorm — water molecules are banging into one another, rapidly travelling up and down, freezing, melting and freezing again. As droplets move up, they collide and combine with other droplets and eventually freeze. Sometimes, when they reach the bottom of the column of air, they will fall from the cloud as rain. Other times, the droplets may move up and down repeatedly, freezing, melting and growing larger with each trip from top to bottom. Eventually, the updraft will not be able to support them and the hailstones will fall to the ground — their size and weight dependent on the strength of the storm and how long they stayed aloft. Sometimes, a particularly strong updraft can eject the hailstone from the top of the cloud, causing it to fall miles from where it originated. Cutting a hailstone in half will reveal rings that represent the multiple freeze/melt cycles.

How much rain can fall from a thunderstorm?

As long as the dynamics that keep the thunderstorm alive remain and the source of moisture isn’t cut off, thunderstorms can rain continuously. The term “training” is used to describe multiple thunderstorms moving over the same area, replacing each other and making the rain appear to be never-ending.

What causes the windiness that sometimes accompanies thunderstorms? What are downbursts and microbursts?

You may remember that within thunderstorm clouds are powerful updrafts and downdrafts. When a thunderstorm is growing, the updrafts outnumber the downdrafts, meaning there is more air moving up than down. In a matter of minutes, these updrafts can build a small cumulus cloud into a powerful cumulonimbus cloud that stands more than 10-miles tall. When the thunderstorm begins to fall apart, the downdrafts then take over. All that air from 10 miles up now rushes down to the ground, moving out in all directions as a strong wind that can reach up to 150 mph. This wind can knock over trees and utility poles, crash airplanes, damage homes and capsize boats.

A downburst and microburst are essentially the same thing, the microburst is just a small example of a downburst. As previously mentioned, thunderstorms are formed with updrafts and downdrafts. When the fast-moving, downward-rushing air ejects from the bottom of the thunderstorm and reaches the ground, it’s referred to as a downburst. When the area affected by a downburst is 2.5 miles in diameter or less, it’s referred to as a microburst; larger than 2.5 miles in diameter is a macroburst.

Downbursts sound very dangerous. Is there a way to predict them without meteorological equipment?

Yes, if you’re outside, perhaps at a concert or sporting event, or even on the water, keep in mind this simple rule-of-thumb: if you stand and face the thunderstorm, is the wind in your face or at your back? Since thunderstorms are either developing or falling apart, air is either being sucked up into the thunderstorm or exhausted outward from it. If the wind is at your back, the thunderstorm is drawing air up into the cloud and is in the development phase. Strong winds are possible at this time, but a downburst is unlikely. If the wind is in your face, air is leaving the thunderstorm as the downdrafts overtake the updrafts. This means the storm is in the process of falling apart and a downburst is likely. Depending on your location to the storm, you may experience anything from a cool breeze to a powerful or damaging wind.

When thunderstorms are in the vicinity, always be aware of the possibility of strong or severe weather. Even unseen storms can create downburst winds capable of damage for many miles. Thunderstorms develop and fall apart at different times, meaning winds can shift in direction and strength for hours.

Sometimes lightning makes it looks like the cloud is illuminated from within, while other times the lightning strike reaches the ground. What’s causes these differences? 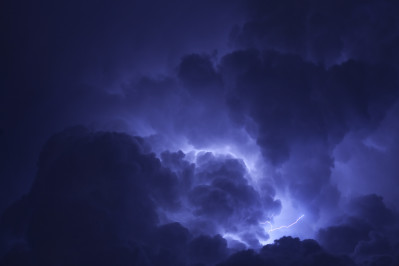 Lightning traveling from cloud to cloud

There are many types of lightning, such as cloud-to-cloud, cloud-to-air and cloud-to-ground. Only cloud-to-ground strikes reach the earth’s surface, while cloud-to-cloud may only appear as ‘lighting inside a thunderstorm.’ However, this explanation only scratches the surface on the types of lightning and how they move. Thanks to ultra-high-speed cameras, lightning strikes can be analyzed across their lifespans — revealing new details all the time.

Is there another type of lightning called “heat lightning”?

Are there different types of thunderstorms related to how they’re developed?

A primary ingredient in thunderstorm development is heat. Sometimes a thunderstorm will form in the afternoon sunshine, but then weaken and die once the sun sets. These storms are most common between spring and fall, and meteorologists in the media will often refer to them as “garden variety” thunderstorms. It can be difficult to pin down exactly when or where these storms will form, as they are dependent on varying conditions.

Other types of storms develop not due to heat, but due to the complex patterns in the upper atmosphere. When these patterns move across an area, thunderstorms will form no matter the time of day. These storms are relatively easy to predict — the passage of the upper features allow the storm to develop. The stronger the upper features, the stronger the resulting thunderstorm. Storms associated with strong upper-level features can produce tornadoes and other types of severe weather.

Is it true that to estimate the distance of a thunderstorm, one can count the seconds between the lightning and thunder?

Yes. Since light travels much faster than sound, the visual appearance of lightning to the observer will arrive much sooner than the audio of the thunder. Since the speed of sound is equal to about five seconds per mile, one can calculate the time between lighting and thunder by counting, and then dividing that number by five. So if the difference between seeing the lightning and hearing the thunder is five seconds, we know the thunderstorm is about one mile away.

What is an “anvil cloud”? 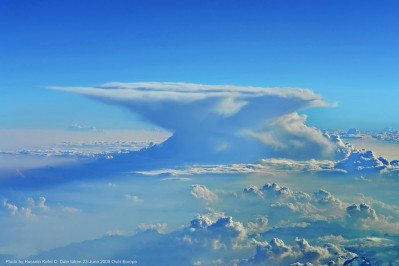 Many large thunderstorms appear to be sheared off across the top, some even with a bit of an overhang that resembles an anvil. This occurs when the growth of a thunderstorm is hindered due to strong upper-atmospheric winds like a jet stream. Upward-moving air of the thunderstorm can’t compete with the jet stream that may be moving horizontally at over 100 mph. The strong winds of the jet stream will not only stop the rising air current, but will “push” the top of the cloud in the direction it’s moving. This creates an “overhang” that gives the appearance of an anvil. The same jet stream can also help the thunderstorm grow, but that’s a topic for another time.

What’s on the horizon for advancements in thunderstorm forecasting?

The continuous improvement of general weather forecasting betters our understanding and forecasting of thunderstorms — specifically, an ability to measure and analyze the atmosphere. Every step forward in computer development means the ability to ingest more data and process it faster. When a cloud goes from being a harmless cumulous cloud to a powerful cumulonimbus cloud in a matter of minutes, it’s easy to see how every second counts.

A tremendous step forward was recently made with the launch of two new weather satellites: GOES 16, (launched in 2016) and GOES 17 (launched in 2018). These two satellites monitor the Earth’s atmosphere in HD resolution, scanning the globe five times faster and providing three times the data than previous satellites. These capabilities allow them to monitor lightning in real-time with advanced monitoring of solar and space activity.