During the course of Hurricane Florence's development through the storm's landfall, the StormGeo TropicsWatch team closely monitored the storm — developing real-time, daily video updates with forecasts and expected impacts. Each update can be found below.

StormGeo Sr. Meteorologist Dave Gorham takes one last look at Florence, with an examination of the rainfall, a fascinating look at the storm’s history and a quick look at StormGeo’s GIS services.

As for what is to come from Florence, though most of the rain has moved away from the Carolinas, what may be the worst of the storm remains still in the future: historic river flooding. With so much rain that has already fallen and still more rain to come, it will take time for the rainfall run-off to work its way into the region’s creeks, rivers and bays. As this occurs over the next five days flood waters will rise and by this coming Friday and Saturday, some rivers across North and South Carolina may crest as much as five feet above all-time historic levels.

Tropical Storm Florence has now transitioned to a tropical depression (winds less than 39mph/63kmh). There is still a well-defined circulation but it will continue to weaken and likely be reclassified as a remnant low later tonight or early tomorrow. Despite the weakening, there is a strong draw of moisture from the Atlantic with torrential rain and historic flooding continuing today and tomorrow.

Hurricane Florence has made landfall, but what will happen next? A lot of rain is still yet to fall and there is a high risk of tornadic activity as well. StormGeo Sr. Meteorologist Dave Gorham looks at the current conditions and the rain expected over the next five days.

Florence has been decelerating and is expected to move ashore on the southeastern North Carolina coast tonight or early Friday morning as a high end category 2 or low end category 3 with winds from 105-115 mph. It will continue to decelerate as it pushes inland. This slow motion will likely result in more damage related to wind and flooding. Some areas of North Carolina could receive 12 hours of hurricane force winds. Near and to about 150 miles to the north of where the eye moves ashore, storm surges of 6 to 12 feet are expected. The primary concern, however, is the flooding. Some areas could receive 20-30 inches of rain.

The first, outer most rainbands are already bringing gusty showers to the North Carolina Outer Banks. Rainbands will continue to push towards the coast this morning. By this afternoon, heavy rainbands capable of producing tropical storm force winds will be impacting the coast from Wilmington, NC to Cape Hatteras. Late tonight or very early tomorrow morning, the center of Florence is expected to move ashore into southeast North Carolina. Near the landfall location, winds of over 100 mph are likely. A prolonged period of damaging winds is expected for coastal areas from the Grand Strand to the southern Outer Banks. Dangerous storm surge is expected along the North Carolina Coast from Wilmington to the southern Outer Banks. We cannot rule out significant surge as far south as the Grand Strand. 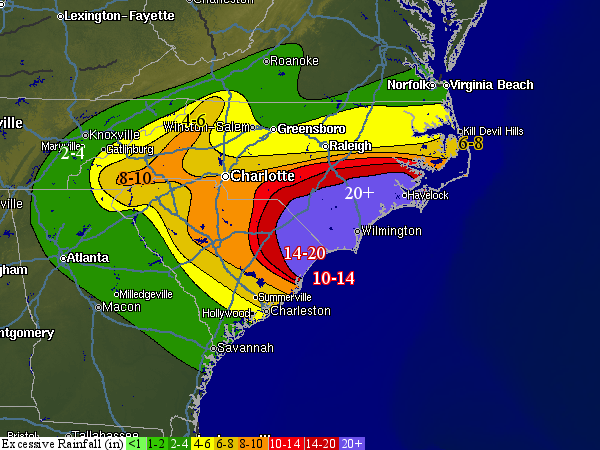 Catastrophic wind and tidal surge damage is expected for the North Carolina coast south of Jacksonville, and a catastrophic inland flood event is expected for North and South Carolina. The threat to South Carolina has increased further due to a predicted west-southwest movement for 24 hours after the closest approach to Cape Fear. In southern Virginia, the risk of flooding is decreasing. Winds remain at 140 mph.

Florence should peak near category 5 intensity on Wednesday. As it approaches the coast, we expect some shear to affect the hurricane, and we continue to forecast Florence to be a category 4 hurricane at landfall. Severe damage is expected from wind, tidal surge and severe inland flooding in eastern and central North Carolina as well as southern Virginia. Northern South Carolina may also be impacted. Some areas will likely see more than 2 feet of rain. Sustained winds are currently 140 mph and gusting to 165 mph.

Florence is continuously intensifying due to favorable environmental conditions, and while winds are currently estimated to be 105 mph, they will peak on Wednesday at approximately 150 mph. At landfall on Thursday, winds are expected to be 125 mph with gusts of 150 mph. There is some chance that Florence could strike as a category 4.

How to Prepare for a Hurricane

According to the American Red Cross, 97% of Americans have not taken the basic steps toward disaster preparedness. What should you have in your emergency kit?