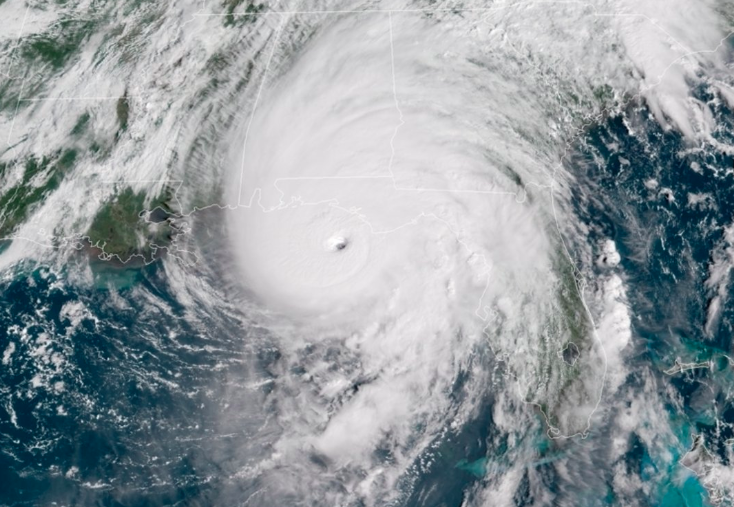 Hurricane Michael continues to progressively weaken.The storm's center continues to move to the northeast and is located over eastern Georgia this morning. Maximum sustained winds have decreased to 60 mph. Michael may weaken a bit more today as the storm moves across the Carolinas. Winds may still be near 45 mph in a small area east of the track as Michael races through the Carolinas at 20-25 mph today. Michael will emerge into the Atlantic near the Virginia/North Carolina border late tonight with maximum sustained winds near 50 mph. Once Michael moves back offshore, it will quickly transition into a larger non-tropical low-pressure system as it races out to sea. It is forecast to pass south of Nova Scotia and Newfoundland Friday night into Saturday morning.

In George and the Carolinas, inland flooding is likely, including in some of the areas that were flooded during Florence. Power outages and minor structural damage due to wind are also possible. 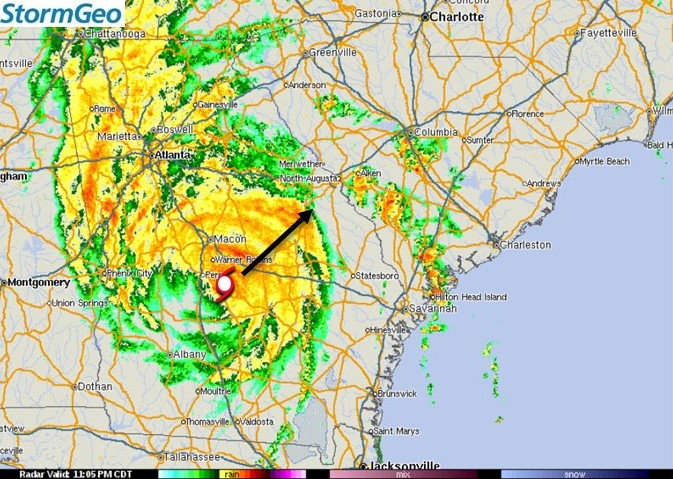 Reconnaissance has found winds to 150 mph in Michael's northeastern eyewall over the past 30 minutes, making Michael an upper-end category 4 hurricane. The center of Michael is only about 10 miles off the coast of Florida south of Tyndall Air Force Base as of 12 PM CDT, which is just southeast of Panama City. Michael's storm surge of 11-14 feet will be moving into the coast within the next 30-60 minutes.

Catastrophic damage due to wind and tidal surge is expected at the storm's center over Florida, while strong winds and heavy rains will spread inland into Georgia, the Carolinas and SE Alabama. Widespread power outages and flooding are also likely. Some areas in Georgia and the Carolinas that were hit by Hurricane Florence can expect to see more flooding.

After landfall, an acceleration to the northeast is expected, taking Michael through Georgia and the Carolinas. Early Friday, Michael is forecast to move into the Atlantic Ocean, passing south of New England and Atlantic Canada. Michael is expected to be significantly more intense than Hurricanes Eloise, Opal, Ivan and Dennis, all of which caused severe damage over the Florida Panhandle. The last hurricane to make landfall as a Category 4 was 2017's Hurricane Harvey.

More than 370,000 people in Florida have been ordered to evacuate and move to higher ground. Florida, Alabama and Georgia have declared a state of emergency. Florida Governor, Rick Scott, said, "Hurricane Michael is forecast to be the most destructive storm to hit the Florida Panhandle in decades. You cannot hide from storm surge, so get out if an evacuation is ordered."

Hurricane Michael continues to strengthen as the system's outer rainbands begin to hit the Florida Panhandle. We continue to predict that the eye will move ashore early this afternoon (local time) near Panama City, FL. Our latest forecast has an intensity of 145 mph at landfall. Extreme damage from wind and storm surge is likely from Panama City to Apalachicola, while storm surge will affect coast communities as far east as the Big Bend Coast. Beyond this afternoon, impacts from Michael will begin to extend well inland as the storm accelerates to the northeast. Heavy rain and damaging wind gusts are expected in far southeast Alabama and southwest Georgia late this afternoon and into the evening. During the overnight hours, significant rain and wind will push northeastward into south-central Georgia. By tomorrow, central South Carolina and eastern North Carolina are likely to have the heaviest conditions with gales likely for the entire Carolina Coast.

Hurricane Michael is now forecast to make landfall as a Category 4 with 145 mph winds near Panama City this afternoon (1-3pm CDT).