What caused the recent heat wave over the US (and what's coming)? - StormGeo 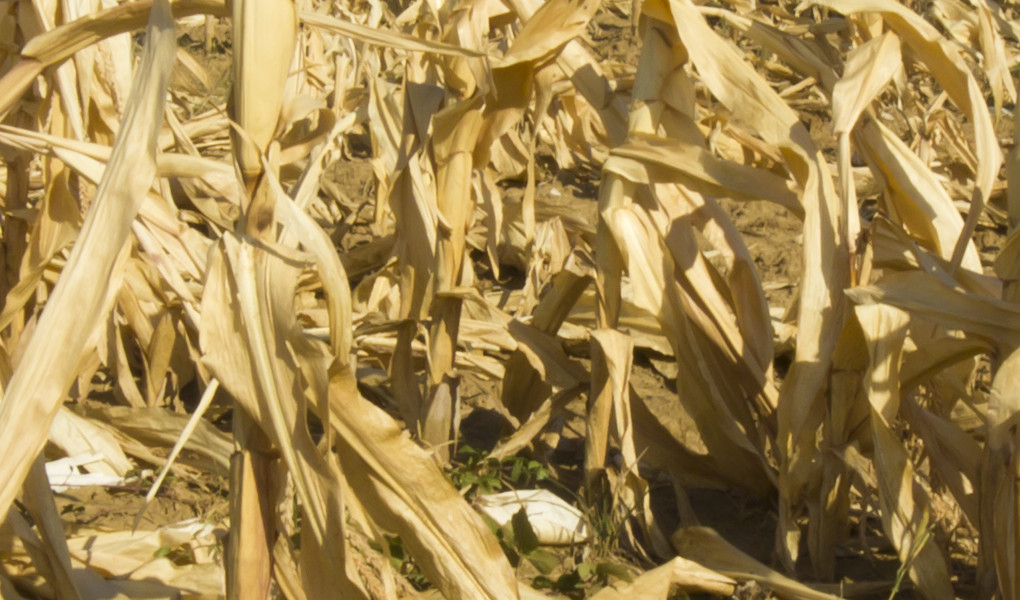 What caused the recent heat wave over the US (and what's coming)?

You may have been feeling the heat lately, especially if you’re in North America, where temperatures have broken records all over the country. We’ve asked Fred Schmude, Senior Scientist for Long-Range Weather Prediction at StormGeo, to help us better understand what causes these prolonged, soaring temperatures.

Heat waves like the ones last week over the Midwest, Northeast and Western US are typically triggered by a strong upper-level high pressure area centered over that region. This high pressure creates sinking air, which compresses the air below, causing it to warm to hotter-than-normal temperatures. These conditions can last for a week or more if the high pressure area is moving slowly.

What gives an ‘upper-high’ its strength is the global pattern that directs where and how it moves. If stagnant, these patterns can persist for weeks or even months. In the case of the upper-high over the Midwest and Northeast US, the effects of the heat wave will not be long-lasting as the global features that triggered it are already on the move. There is a transitory pattern that will allow the ridge of high pressure to break down within 6-10 days, allowing a weak upper air trough to move in which will bring significantly cooler air. 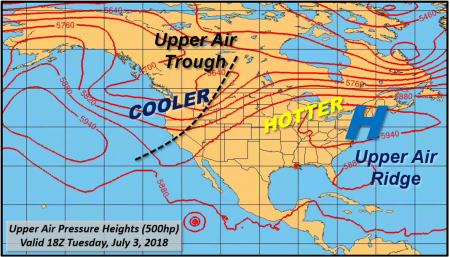 An upper-level trough over Central Canada and the northwestern US pumps mild southerly wind into the eastern US, intensifying and expanding the upper-high and thus, allowing the heat wave to intensify and linger.

What causes this type of pattern to develop over North America?

At this time of year (early summer), the tropics region contains the majority of warm air and energy, making it one of the key influences of global atmospheric flow patterns. This flow pattern, or “teleconnection,” can be responsible for unusual weather patterns across the globe.

How much energy and warmth does the tropics region generate?

The Madden-Julian Oscillation (MJO) is used as an indication of energy transfer over the tropics in the way it influences temperature, rainfall and atmospheric pressure. The MJO typically makes its west-to-east cycle around the planet every 45-60 days but can slow down at times or even stagnate over certain regions. These “stagnations” can lead to atmospheric patterns that can sometimes get “stuck.”

While researching the current heat wave over the Midwest and Northeast US, I noticed the MJO was recently over the Phase 2 region (Indian Ocean). Previous composite-based studies verify that when the MJO is in Phase 2, an upper-level trough in the Western US will be evident as well as an upper-level ridge in the Eastern US. That’s precisely what we witnessed last week and it allowed the significant heat wave to gather steam. 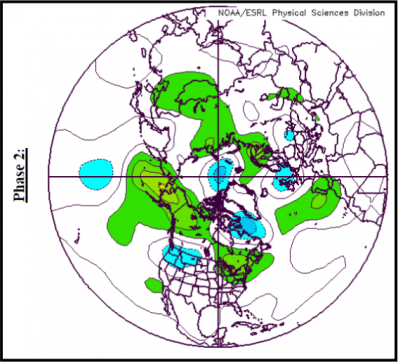 Since the MJO was not stagnate, the heat wave in the Midwest and Northeast was a relatively short one and temperatures are already returning to normal. Meanwhile, the higher pressure system remains stagnant over the Western US, meaning the heat wave in California will not be dissipating anytime soon. Check out our tips on how to stay safe during a heat wave.