How to Estimate a Hurricane's Damage Potential - StormGeo 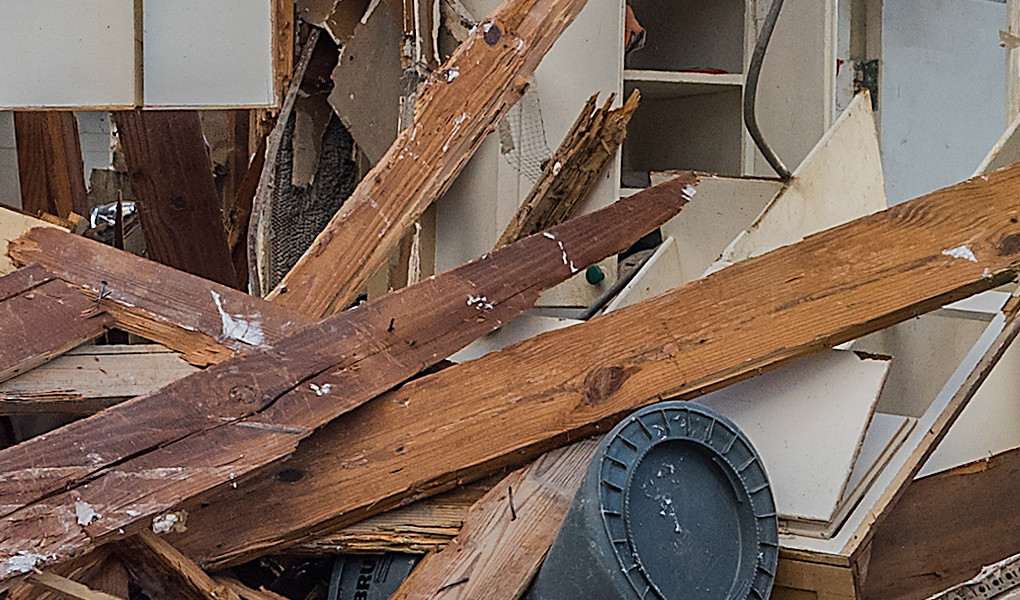 How to Estimate a Hurricane's Damage Potential

The Hurricane Severity Index (HSI) is StormGeo’s proprietary method of classifying a hurricane based on its potential for damage. Often compared with the Saffir-Simpson Hurricane Wind Scale, the HSI differs significantly, in that its purpose is to define the damage potential of any tropical storm.

The Saffir-Simpson Scale was introduced to the public in 1973, when weather satellites were becoming more commonplace technology—providing regular imagery for the evening news. With the Saffir-Simpson Scale, hurricanes could now be talked about and compared, even by non-meteorologists. The scale, however, is narrow in its function, categorizing storms solely by their wind speed.

The scale organizes tropical storms with winds of 74 mph and higher into five categories based on the storm’s maximum average wind speed over a one-minute time span. The scale does not consider storm size, movement speed, rainfall amounts, atmospheric pressure, or tropical systems with winds of less than 74 mph. Its strength lies in an easy-to-understand 1-5 rating system and its 46-year history with the public. 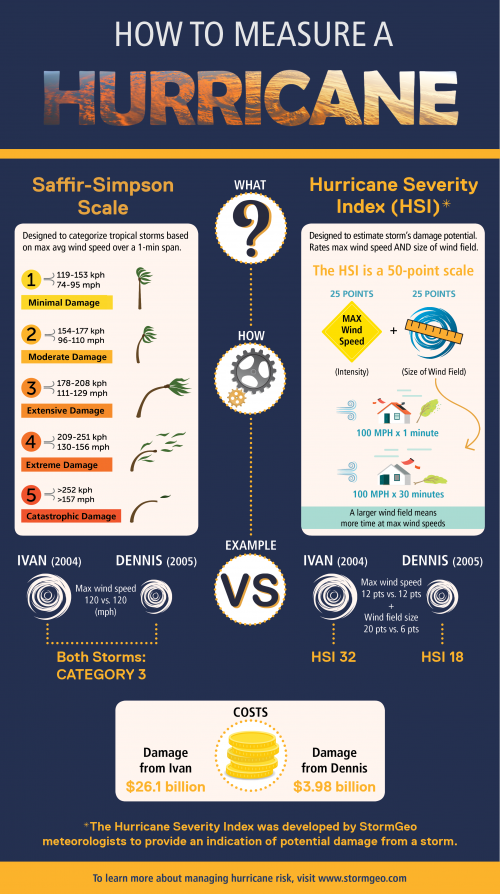 The need for a rating system that better addressed potential for damage was discussed among meteorologists for decades. However, it was not until after devastating Hurricane Katrina in 2005 that ImpactWeather (now StormGeo) meteorologists developed a new rating system.

To determine a storm’s damage potential, the size of the wind field, as well as the maximum wind speed, must also be considered. To illustrate the importance of the wind field size, imagine a structure sustaining a one-minute burst of 100 mph wind vs. 30 min of the same wind. The damage to the structure would be vastly different.

The duration of the wind’s impact is directly related to the size of the storm’s wind field, and there can be several wind fields within one storm. This type of measurement is complicated. It is foundational within the Hurricane Severity Index, but not within the scope of the Saffir-Simpson.

The size of the wind field has impacts not just on land, but also to the ocean water as it is driven ashore by the approaching hurricane. A larger wind field will impact more water for a longer period of time. This drives more water ashore, moving further inland and also creating a greater storm surge. This is also a calculation beyond the Saffir Simpson Scale. 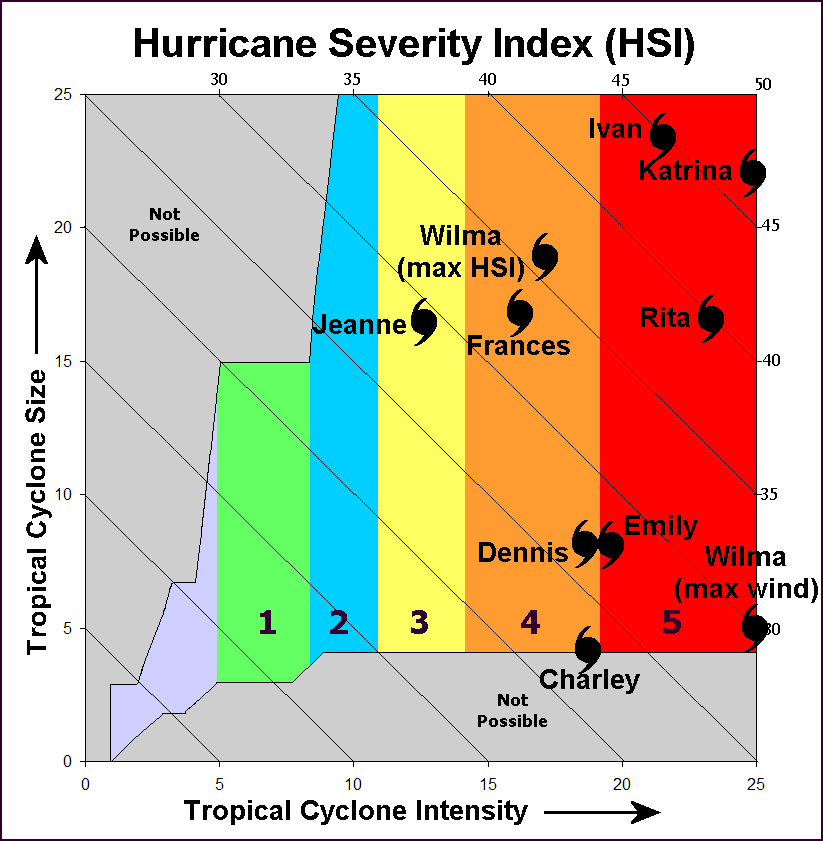 Unlike the Saffir-Simpson Scale, the index rates all tropical cyclones from the weakest depressions to the most powerful hurricanes. In action, the HSI provides StormGeo clients with a clearer picture of a storm’s capability.

HSI of Hurricanes Ivan and Dennis

Both Ivan and Dennis (2004 and 2005 respectively) were rated Category 3 on the Saffir-Simpson Scale. The storms developed to their peak intensity in the same area in the Gulf of Mexico and were ready to strike the same area of U.S. coastline. Though rated identically on the Saffir-Simpson, the storms were drastically different in terms of size—with Ivan’s broad expanse dwarfing compact Dennis. On the Hurricane Severity Index, both storms earned similar intensity points but Ivan earned 20 points for size compared to just 6 points for Dennis. This gave Ivan a HSI of 32 points and Dennis 18 points. 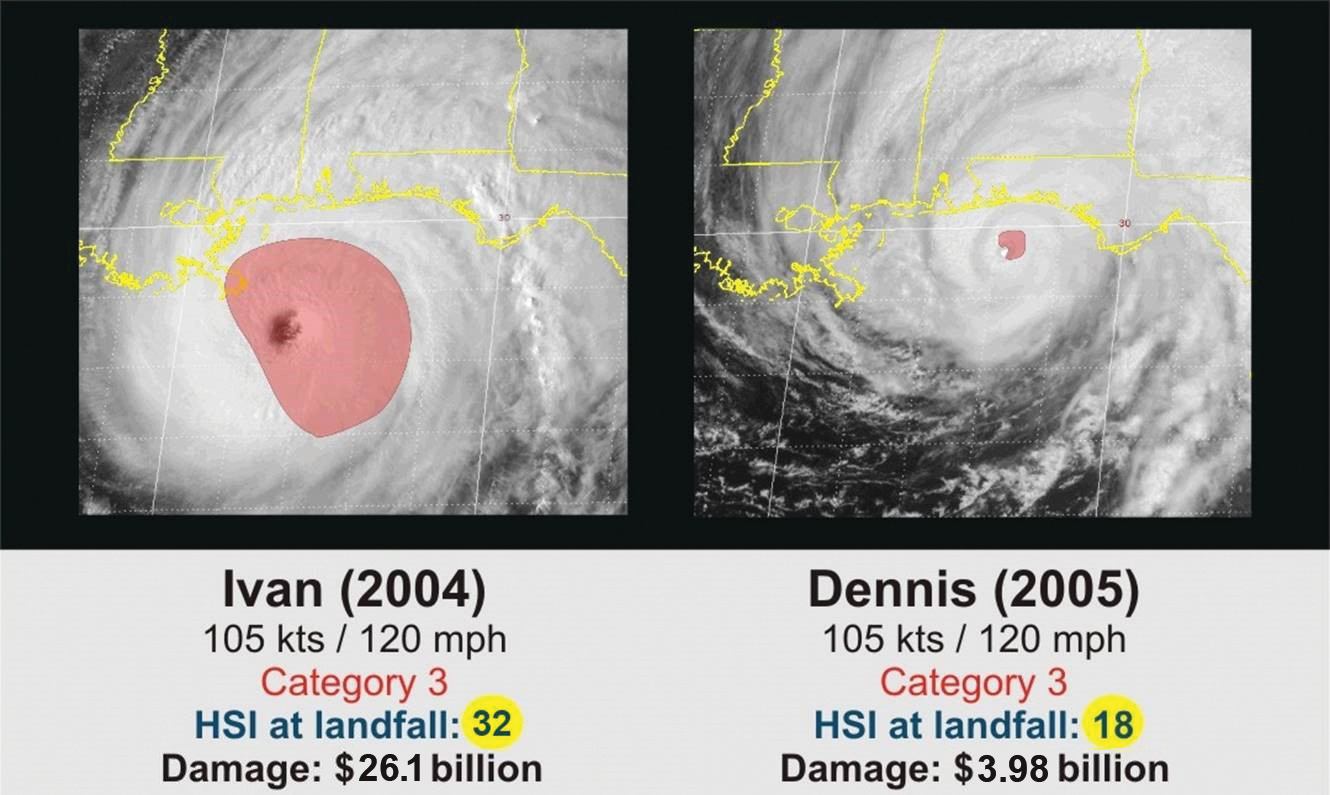 While the HSI gives a better indication of potential damage from an impending storm, it is not without fault. For example, the index does not consider rainfall and rainfall-related flooding. This can be illustrated by the catastrophic flooding of 2017’s Hurricane Harvey, which was beyond the design of the HSI. StormGeo meteorologists are currently working on a revised HSI to consider this, as well as other improvements.

Both the Saffir-Simpson and HSI have their place and can be considered complimentary to one another. StormGeo clients have come to rely on the HSI to provide early warning of a storm’s potential for damage.